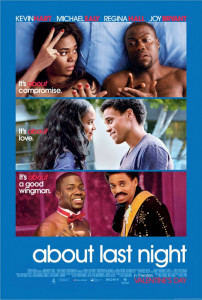 One of the best additions to this version of the story is how the best friends are handled. I don’t remember Jim Belushi and Elizabeth Perkins dating in the original, but it is a stroke of brilliance to have the film chart two relationships simultaneously. Even though Bernie and Joan break up pretty early in the film, they are the best friends of our main couple so their fiery, antagonistic relationship is very much on display throughout the film. Seeing them constantly at each other’s throats did wear on me a bit (being the nice, mild-mannered man that I am), but they are a hilarious train wreck and the way it all comes together in the end is absolutely wonderful.

This leads me to the other main reason that About Last Night succeeds: its cast. Michael Ealy and Joy Bryant are a great on-screen couple, bringing us both the tender moments of new love and the unhappy frustration of a love that has somewhat faded. They are both actors of considerable range and it’s great to see them given so much to work with. Kevin Hart and Regina Hall are also excellent together, but for entirely different reasons. They take the film to its hilarious heights with their quick banter and fantastic physical comedy. Just a few minutes into the movie they drunkenly try their best to get it on in a bar bathroom, and it only gets funnier from there.

The relationship between Danny and Debbie also feels more real and adult in this version of the story. In my review of the 1986 version, I mentioned how Demi Moore’s line about “two kids playing house” rang true, but that isn’t so much the case here. Both central couples struggle with being ready to live and work together for a happy relationship, but you never get the sense that Ealy and Bryant are failing out of childish naivety. Instead, they feel more fearful and afraid of being hurt than just being young and clueless, and I found this small difference to be more engaging and rewarding overall. Both central couples move their relationship forward too fast, but this slight change gives me more hope that these 2014 lovebirds will successfully recapture what they once had and re-build from there.

It’s rare that a film can deliver deep belly laughs, engaging drama and believable relationships, but About Last Night does all three. I want to stress that this film is not just a great black romantic film, it is simply a great romantic film (like all the movies we’ve covered for the Black Love event). Like the protagonist of Something New does, take a chance on something new and inject some color into your life by giving at least one of these films we’ve covered a shot!