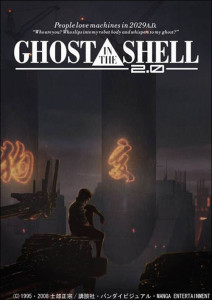 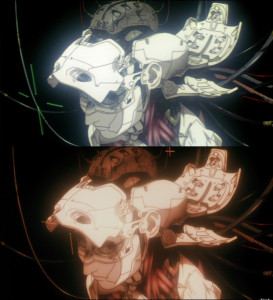 The opening scene is by far the worst. I was groaning my way through it and wishing that I really had skipped the movie. It remakes the shots of Major Kusanagi in CG, but leaves the other shots in 2D. It makes for a jarring back and forth with almost every shot, and that was even worse than if the whole thing had been done in CG. Fortunately, after that horrid scene and the opening credits are finished, the rest of the film is pretty much the old cell animation with only minor touch-ups. The scuba diving scene is done in CG, and a few of the helicopter scenes at the end are, too, but that’s about it. That’s still not some kind of compliment, but it did mean I could sit through the rest of the film. The original CG is of course replaced with brand new stuff, too, but this is much more acceptable as those moments were well suited to CG, and the new stuff is rather nicely blended in.

The other huge change is the color scheme. The original film was awash in soft blue and green tones that faded into the dark environments. This time around, and apparently just to change things up, the color has been adjusted and saturated with a bright glaring orange. Instead of blending with the shadows, it contrasts with them, and it’s a bit like looking at a flashlight in the dark. It’s jarring, and far less pleasant to look at. Occasionally the color adjustment does bring out more details in the artwork that had been too dark to notice in the original, but most of the time it washes out the details and makes it look fuzzier in the well-lit sections. 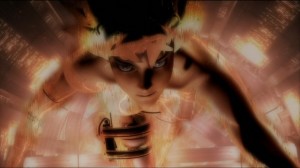 The acting has been redone as well, mostly by the original cast, and it holds up just as well for the most part. The big change is that the Puppet Master, formerly male, has now been given a female voice. In some ways this makes sense, as he is stuck in a female body, so you would expect its voice to be female. But it also removes the creepy factor. I just didn’t like it, although it is perhaps the least offensive of the changes in the film.

One could argue that I’m just hating on Ghost in the Shell 2.0 because it’s different. You might even be right. If I had seen this version first I may not have minded some of this stuff, and I may have even found the original the odd one out. But I think that’s not the only thing at work here. Even under entirely objective comparison the original Ghost in the Shell is the more enjoyable version. There’s not a single change to the film that actually makes it better, and I’m baffled as to why anyone would even try.

There is certainly no good reason to track this one down. Just avoid it, and if this is the only version of the film you’ve seen, then I highly recommend watching the original version and seeing it the way it ought to be.

The trailer is above, and below is a video that does a side-by-side comparison of the film’s opening credits and showcases the differences between the two versions quite well.