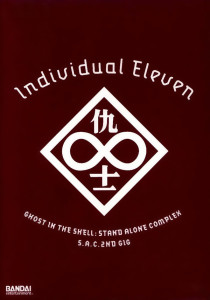 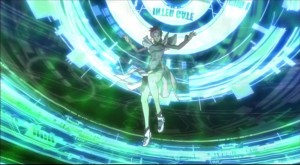 The film has a lot of virtual reality scenes in it this time, which is something that hasn’t really been a mainstay of the series before. I never really like it when cyberspace is presented as a three-dimensional world that acts like a video game. Such an interface seems too convoluted and impractical to work in reality. And while the goal of a sci-fi action flick isn’t always realism, Ghost in the Shell always struck me as having a very down-to-earth, realistic view of futuristic computer technology. Having the characters meet in a virtual meeting room and looking at computer files is one thing, but having them do so when they’re all in the same room together anyway is rather odd. This whole VR hacking stuff just killed the mood for me, especially when previous entries in the franchise have clearly shown them transferring this kind of data directly into their brains without any kind of VR framework. So what’s with all the VR goggles? I’m afraid I just wasn’t buying it. 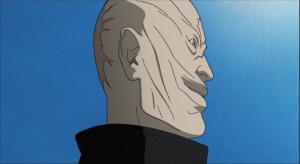 The story itself has some odd gaps, though I think they were more to do with clipping out pieces of the original series to fit the time constraints. Or maybe it was explained in one of those huge exposition chunks that I glazed over. The team is hunting down a criminal organization of uncertain identity. A bizarre string of group suicides turn up, all of them claiming to be an immortal group called Individual Eleven. How this Individual Eleven group keeps committing suicide is a mystery that never gets explained. Instead, they somehow pin it down to one guy named Kuze who is leading a civil rights movement for refugees from World War IV that have taken up residence on a small Japanese island.

Kuze is trying to get his hands on a nuclear bomb to use as leverage to create a new independent nation for the refugees. But there’s also a creepy, scarred government agent named Gotoh who seems to be manipulating events behind the scenes. Our intrepid detectives are working the case from both angles, but the motives and reasons for how things worked out were a bit lost on me. I think this was a story that needed to be told in a longer format than a two-hour film. It just had far too many complexities to work in such a short space. 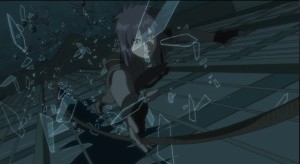 The Tachikoma robots are back, but this time they are better integrated into the story and feel less like a tacked-on subplot. Unfortunately, it becomes a bit redundant to their story in The Laughing Man, so I wound up a bit disappointed with it anyway. That doesn’t stop them from having a lot of cool scenes and generally adding to the humor of the story. There are some kick-ass action scenes with them as well, and I even overcame my hatred of CG to enjoy them driving around on walls and dodging helicopter attacks.

In general, the action is well done all around and provides a sort of momentum for the story that keeps it going even though I found myself a bit lost regarding the plot. So even though I have my issues with the film, it still has its moments of fun. I suspect this was a pretty good story in the series format, but here it just has too many gaping holes that need filling. The Laughing Man might have worked fine as a film, but Individual Eleven is undoubtedly best watched in its series format.