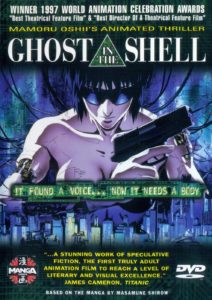 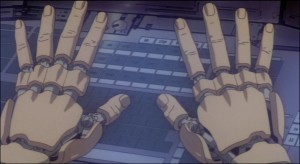 This works so well here largely because of Mamoru Oshii’s talent for crafting evocative visuals. Critique his pacing all you like, but the man knows how to frame a scene for maximum dramatic impact. Ghost in the Shell captures a despondent and run-down cyberpunk future perfectly. There’s plenty of action in here, but this film’s real heart is its paranoia-inducing tone.

It also has a large focus on evolution which is easy to lose sight of underneath all the other concerns of the film, but it’s at the heart of everything that happens. The movie isn’t just about individual identity, but also what it means to be human at all and what the definition of life in general is. The film is not so much about the police case that the plot focuses on, but rather on what humanity is becoming, and what else is going to evolve with us. When you look for it, the evolutionary themes are clear, especially in the big showdown at the end of the film, which takes place in some kind of derelict natural history museum, with an evolutionary chart as the backdrop for the fight. 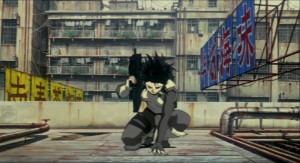 Despite being more focused on intellectual themes rather than action scenes, there is a lot more action here than in most Mamoru Oshii films. It’s been said that all of his films begin with an action sequence followed by a slow middle section then end with another action scene, and that’s pretty much true for Ghost in the Shell as well. The difference here is that those opening and closing action scenes take up most of the movie, and the center slow part is much shorter than Oshii’s other films. This makes the film far better paced than his other stuff, and it is still by a long shot the best Oshii film I have seen so far.

It’s also an incredibly gorgeous film, not just in the directing, but in the animation as well. This is some top-notch stuff, and even the minor elements that most anime films would slack off on are treated with the same care and attention as the more visceral combat scenes. There’s a bit of light CG here and there, but nothing that ruins the film, or even detracts at all from the feel of the film. Everything is fluid and graceful, and the backgrounds are richly detailed and bring the film to life. In fact the background art is so good that it reminded me a bit of Makoto Shinkai, though they are far darker and drearier than anything in a Shinkai film.

Ghost in the Shell is fantastic, and deserves every bit of the hype surrounding it. It’s a great futuristic action film, it’s a great intellectual thriller, and it avoids the sluggish pacing that so often brings down other Mamoru Oshii films. Old it may well be, but it never feels like it. If you haven’t seen this one already, you really need to.