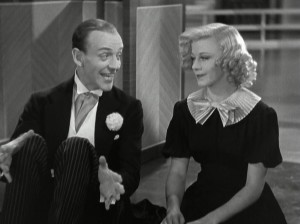 As I mentioned before, the basic framework of this film has been used time and time again. Simple misunderstandings threaten to derail the characters’ lives and if they only opened their mouths and blurted out what they were trying to say to each other, everyone would be saved a lot of grief. But then we don’t have a movie! Besides, when the misunderstandings are facilitating laughs and many wonderful song and dance numbers, even if we know the general ups and downs of the story, it’s more of a great, familiar present than a used, well-worn re-gift.

Interestingly, the only glaring mar on this brilliant film’s record is also the film’s most iconic and memorable sequence. I speak of the Bojangles dance number, which Fred Astaire performs in blackface. I understand that blackface was culturally accepted then, and I don’t think we should hide films like this away so that no one gets offended. There is always something to be learned from the past. What I find most interesting about this particular instance is that it doesn’t feel especially aimed at satirizing black people. The song is an instrumental number and the scene focuses solely on Astaire’s ability to dance. Further research indicates that the dance was intended as a tribute by Astaire to Bill Robinson and John W. Bubbles, fellow dancers that Astaire admired (and in the case of Bubbles, studied under). In an overtly racist time, I suppose any homage to a black man would have to be done subversively, so it makes sense that Astaire would use blackface to do this. 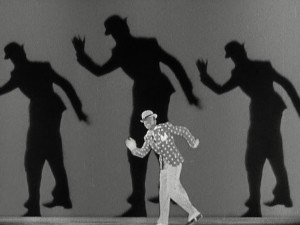 Also of interest is how Swing Time compares to another 1936 musical I watched recently, Hats Off. That film was a low-budget affair, doing the best it could with what it had, while Swing Time was produced by one of the biggest studios at the time, featuring two of the 1930s’ biggest stars. The production values are obviously on different levels and are pointless to compare. But one of the plot points is shared by both films, and I think it speaks to a 1930s cultural difference that might otherwise fly over our modern heads. Both films feature a struggle acquiring the talents of a famous bandleader, and while this might just be a silly coincidence, I think it lets us in on how important these figures were at the time. A bandleader was the rock star of his day, the man with his name on the marquee that everyone came to see. This is something that is largely gone in our society, except maybe in small doses like the late night TV bands (which has always felt like some holdover tradition from the past to me).

Swing Time is a charming, musical experience that will warm your heart and make you laugh. It’s not the film to jump into if you’re inexperienced with musicals, but seasoned fans will find a truly transcendent film experience.

Swing Time was the concluding film in the 2013 Blind Spot Series, but don’t worry because it’ll be back next year. For those who don’t know what I’m talking about, the series is designed to make it easier to watch films that have sat for ages on your “To Watch” list. The kernel of the idea is that if the neverending, gargantuan list of films is overwhelming and feels insurmountable, a small list of 12 for one year is easily manageable and rewarding. And it is. It’s all the brainchild of Ryan McNeil over at The Matinee, one of the web’s premiere film blogs. Head over there tomorrow where he’ll have a post of his own for the series, as well as links to all the other people taking part. And come back tomorrow when I announce what I’ll be tackling next year!