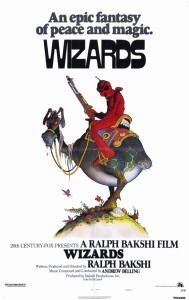 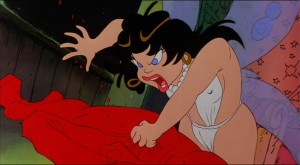 Despite being a cartoon, the film doesn’t pander to children, and the story feels vastly different than a production made for kids. Eleanor, a ditzy girl who wears almost nothing and whose nipples are constantly poking through what little she does wear, sees her father assassinated, and the assassin is soon killed by Avatar. Eleanor then dives onto the assassin’s body and claws at him with her bare hands, screaming in rage the whole while. I had already figured out that this film would be different, but that moment really hammered the point home.

Right after that, the elf warrior Weehawk runs up and spouts a few choice emotionless lines that rather kill the mood, thus illustrating how the film can fall on its face at times. There are also some moments that just feel neglected in the editing department, moments that were quickly passed by without allowing any emotional resonance. Ultimately, Wizards is something of a B-movie, with some surprisingly drab scenes that should have had more punch. The animation is often clumsy as well. I’m not knocking the film. It had a very small budget and worked as well as it could with its limited resources. But there’s no denying that it’s a far cry from Disney’s finest when it comes to production values. 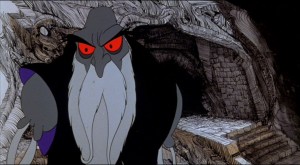 A few minor missteps can’t bring this film down, though. Some of its clumsier moments become some of the best parts. Despite being a sword and sorcery type setting, stock footage of World War II bombers and tanks are spliced into scenes with more antique arrows and spears. Rotoscoped planes fly by, and are then replaced with more standard animation of mounted bird monsters. There’s such a bizarre mismatch of styles and visuals that the whole film turns into a mysterious and bewildering adventure highlighted by a soft and lulling narration by Susan Tyrrell. This narration is like a mother telling a fairy tale to a child, and it helps bring a sense of magic to the film that elevates it beyond mere silly entertainment.

I think that is an important point to keep in mind. The problem with the fantasy genre — the problem with the fact that fantasy has become a genre — is that it has lost that sense of wonder. Too often fantasy isn’t fantastical. It isn’t awe-inspiring. But that’s exactly what Wizards is. Couched within a superficially generic story is something that can take your breath away. That alone makes Wizards worth watching.