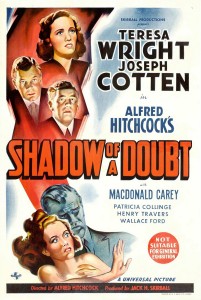 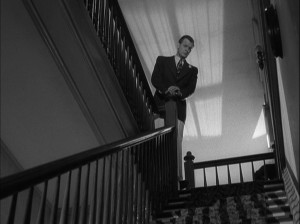 I often think of Alfred Hitchcock as the quintessential entry-level classic film director. His films are always entertaining, and they are well-liked by enough of the population that if you admit to liking them you can usually find someone in a crowd that will agree with you. As you would expect of someone with this reputation, the film is expertly shot. It’s not nearly as flashy as Hitchcock’s later films, but the shots all feel skillfully planned and with specific purpose. I should note that “flashy” probably isn’t the best word to describe his later films, but in relative terms something like Vertigo would most definitely be flashy in comparison to Shadow of a Doubt. Anyway, while the whole film is well-shot, the close-ups are especially impactful. There’s only a few truly tight close-ups (these kinds of shots were rather rare at this time in film history), but each one here is designed specifically to twist the screws of your mind, to get you as quick as possible to that “Aha!” moment that good thrillers thrive on. Hitchcock was always good as such things, and his work here is flawless.

Shadow of a Doubt was a part of the 2013 Blind Spot Series where I see one movie a month that I feel I should’ve seen a long time ago. It’s all the brainchild of Ryan McNeil over at The Matinee, one of the web’s premiere film blogs. Head over there tomorrow where he’ll have a post of his own for the series, as well as links to all the other people taking part in the series.