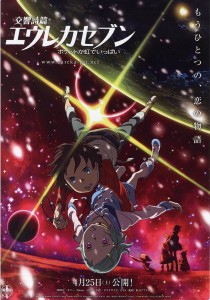 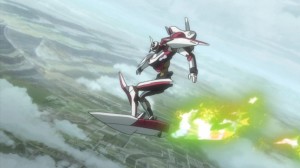 This is largely due to it skimming over the more obvious genre tropes that populate mecha anime. Yeah, yeah, the main character is some kind of “chosen one” that is totally awesome at piloting his mecha, which starts as a car then transforms into a robot riding on a flying surfboard. Big deal. The movie just skims on by these blander aspects and dives more into the actual story at hand. And that story is dense. Really dense. Even at two full hours, this film is filled to the breaking point with explanations. There’s hardly any breathing room to digest all the information it throws at you. My mind was racing just trying to keep up. It cleverly overlays this information on top of the action scenes, making it rather efficient at telling the story, but this is also something of a problem, since you can’t really pay attention to both at the same time. I think this film would be best experienced on a second or third viewing. That way you could settle back and sink into the story rather than get left behind with all the info it contains. 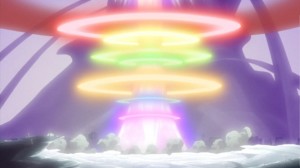 But the story that unfolds is quite good, and it has some fun twists along the way. It focuses on two separated childhood friends, Renton and the apparently inhuman Eureka. I felt their relationship was too one-dimensional, but I’m willing to put that down to the compressed nature of the film. If you can accept their entire relationship being based on a shared childhood, then you’ll be fine, but it is somewhat unconvincing that Renton is still so obsessed with Eureka even though he has lived longer without her than the amount of time they lived together.

Throughout the film, they reference recreating the world, so I was worried right from the start that it would have an Eva ending, and it sort of did. But it was also distinct enough that it felt like its own thing. The whole film felt this way, reminiscent of other shows, and yet having just enough of its own take on the situation to prevent it from being a cheap knock-off. It’s put together rather nicely as well, managing to tell a story both exciting and intriguing. For the most part I had a good time watching it. 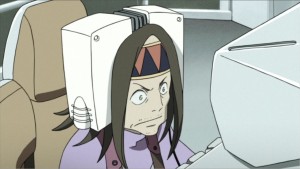 The biggest problem with the film comes in the form of the floppy-armed blob-looking thing, Nirvash. In both appearance and plot function, it is something of a cross between R2-D2 and Jar-Jar Binks. On the obnoxious sidekick scale it sadly rates a little closer to Jar-Jar. It’s clearly supposed to be the cute comic relief character, and it fails miserably. Its presence only inspired irritation, and every time it showed up it sucked a little more fun out of the movie. It wasn’t enough to ruin the film for me, but it did blunt my enjoyment. What’s weirder is that Nirvash seems to be the one that actually does everything. It might just be the film compressing the story so much, but it seemed that Renton never actually flew his giant robot at all. Nirvash was constantly taking control of it, and Renton was even unconscious for an entire dogfight. It was like if Luke got knocked out during the trench run, and R2-D2 took over and blew up the Death Star.

Despite its flaws, I did have fun with Eureka Seven. It’s an entertaining film with enough of its own flavor to make it stand out, even though its inspirations are quite obvious. It’s not going anywhere near my top ten list, but it’s certainly worth checking out for mecha fans.