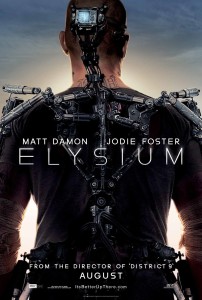 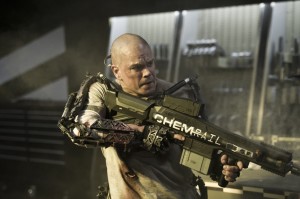 While Elysium should be judged on its own, it has so many similarities to District 9 that it becomes very hard to think about one without the other. They are not related in any way, they merely sprouted from the same mind so they explore a lot of the same things. Stuff like class warfare, urban slums, body explosions, etc. What’s interesting about Elysium, though, is that it’s something of a reversal of District 9. Elysium is a popcorn film with slight social commentary, while District 9 is a social commentary film that also serves as a popcorn flick. While that reversal would be perfectly acceptable, I think the major failing of Elysium is two-fold. First: District 9 is a better popcorn movie. Second: Elysium doesn’t fully embrace the switch-up, instead leaning hard into mainstream clichés designed to enhance our emotional response to the slight social commentary, when in fact it merely shines a light on just how slight it is.

But to focus on this — and it’s admittedly hard not to — is wrongheaded when watching Elysium. No matter what, this is a summer, popcorn movie. It’s a sci-fi melodrama where these down-on-their-luck characters are striving for the stars and we sit back and hope along with them. Elysium might not say anything all that deep, but it gets its point across rather well and I imagine many saw the film and drew hope and inspiration from it. If not from the actual storyline presented, but from the promise of a better possible future for humanity. This is one of the greatest strengths of science fiction, its ability to awaken the mind to fresh hope and desire is uncanny and Elysium fits the bill considerably in this regard. 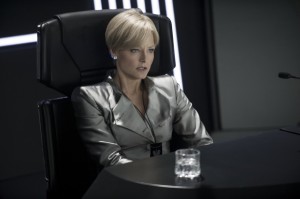 Elysium also delivers a barrage of incredible special FX. The designs of everything from the robots to the shuttles to Elysium itself are incredible. As with District 9, the effects work perfectly with the filmed elements, proving to me once again that you just can’t beat a director with a special FX background shooting a special FX-filled film. The CGI here is just outstanding, and if this doesn’t at least get a nomination for visual FX the Oscars are a total sham (which totally isn’t already true :))

If you dig science fiction and you want to see something else from the mind that brought us District 9, then dump your “This is gonna be District 10” expectations and watch Elysium with an open mind. It’s got its fair share of issues, but the positives far outweigh them. Matt Damon is great as always, Jodie Foster is stern and commanding, but it’s Sharlto Copley that completely steals the show as Kruger. Elysium is science fiction done mostly right.