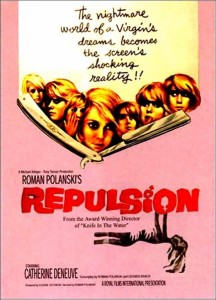 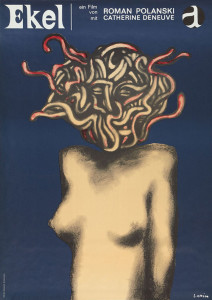 Personally, I didn’t much care for Repulsion. The pace was so lethargic that it nearly put me to sleep. It’s interesting to have the pace of the film reflect its main character, and Repulsion does this exceptionally well, but I found myself spacing out and losing interest regularly. Perhaps this is the product of being a modern viewer — no matter how many old films I watch, I’ll still be of the modern era — or perhaps it means that the film is simply not suited to my tastes (like many of the Polanski films I’ve seen).

What I can say is that despite my inability to fully engage with Repulsion, it is quite a movie. The ways in which Polanski manifests Carol’s deepening madness are quite impressive. The film is essentially a low-budget affair, but it uses what it has to full effect and creates some truly striking visuals. I have to imagine that David Lynch’s Eraserhead was at least in some way influenced by this film — if nothing else, the rabbit carcass seen here reminded me visually of the baby in the later Eraserhead.

And like Eraserhead, Repulsion feels like there are layers upon layers upon layers of symbolism and subtext at work. This creates a thick arthouse vibe that sits in stark contrast to the somewhat pulpy storyline, but the film never once feels pulpy. Symbolism is generally hit or miss with me, and the stuff here was largely a miss (and by that I mean I didn’t get it). I have a good idea what Polanski is trying to say with the film overall, and I get the obvious symbols like the post card of the Leaning Tower of Pisa representing a threatening penis, but I think I missed something that was vital to tying everything together… or it wasn’t there. One of those. In any case, Repulsion isn’t about “the why,” we’re supposed to be deep in Carol’s thick paranoia and distress, experiencing “the how” first-hand. 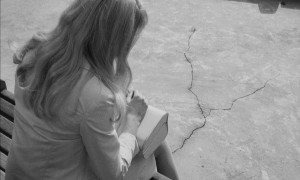 Perhaps this next observation shouldn’t enter the conversation, but it’s hard not to juxtapose the themes of this film and the 1977 rape scandal that caused Polanski to flee the country to avoid possible jail time. With knowledge of this event, Repulsion could be read as being a lot more revealing of Polanski as a person than it would initially seem. Repulsion might center on a female character feeling the oppressive thrust of male desire, but might the film actually have been a way for Polanski to explore his own oppressive desires? Who’s to say, but it’s definitely hard for me to take Repulsion at face value knowing what the future held for Polanski.

I respect Repulsion, and I recognize it as a legitimate classic worthy of its status, but I still didn’t like it much. Does that make sense? If nothing else, I’m sure images and bits from this movie will stay with me for a long time, whether I want them to or not.

Repulsion was a part of the 2013 Blind Spot Series where I see one movie a month that I feel I should’ve seen a long time ago. It’s all the brainchild of Ryan McNeil over at The Matinee, one of the web’s premiere film blogs. Head over there tomorrow where he’ll have a post of his own for the series, as well as links to all the other people taking part in the series.