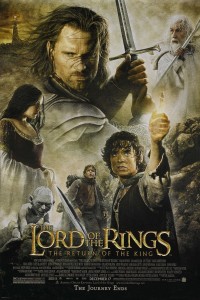 In Return of the King we finally venture into grand, white city of Minas Tirith in the land of Gondor. This could have easily blended together with the people of Rohan, but the design work on Minas Tirith’s architecture and culture does wonders to set the two apart. Tolkien definitely did the initial heavy lifting, but Jackson and company really brought the ideas forward and made them come alive on-screen.

I always knew that Lord of the Rings was an allegory for Tolkien’s experiences in World War I, but never has this aspect jumped out at me with such veracity. The hobbits are our surrogates in this War of the Ring, they are the everyman drafted into the infantry to fight a war that doesn’t directly affect them at this point. But no matter what circumstances they find themselves in, the hobbits persevere, and are often more courageous and valiant than any of their full-size friends. Their bonds of friendship are tight and unbreakable, and they teach the men who seem bred for this type of warring life more than a few things about what it means to fight, struggle and sacrifice for their country.

This all hit home rather hard towards the end of the film, and it made me think about Sam Fuller’s The Big Red One. Both films are tales of the survivors, how they made it through, and how their war experiences will forever change their lives. But where The Big Red One was butchered upon its initial release, Lord of the Rings was allowed to flourish at just over nine hours. This says a lot about humanity’s desire for escape, but a historical war film with the grand epic feel of Lord of the Rings could be one of the most important films of all time.

I’ve managed to get through my reviews of this series without once mentioning one of my most favorite aspects: Howard Shore’s incredible score. Much like any great film score that synchs up flawlessly with the images (such as Star Wars or 2001: A Space Odyssey), Shore’s work on Lord of the Rings is without equal. Easily my pick for the best film music of the entire decade, his amazing themes are skillfully woven together to create a perfect aural representation of the images on-screen. But it was a quick moment towards the end of this film that sparked this paragraph. While Frodo stumbles up Mt. Doom and Jackson captures his anguish in tight close-ups of rock and fist and dirt, Shore goes the opposite direction and inserts a light, almost happy flute to represent everything this moment is about. The hobbits left home to protect their happy way of life, and this is what Frodo must hold onto to keep moving. It’s an incredible moment that sums up the entire drive of the trilogy in a few hopeful notes.

Peter Jackson’s FX background allowed him to work wonders on the Lord of the Rings trilogy, and it continues to stand tall as the crowning achievement in fantasy filmmaking; I wonder if anyone will ever top these films. At least for now, there’s no one even trying, and I think that says a lot about how well-made this trilogy is. The Lord of the Rings is truly classic cinema.