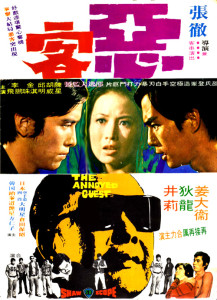 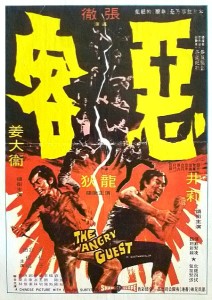 Just like the Thailand footage in Duel of Fists, the filming around Tokyo feels more like a travelogue than a movie. I enjoyed these sections as I’ve never been to Japan, and even if I had been I’d never have been to 1970s Japan. I like how these scenes are shot, because they feel like home movies of a foreigner in a strange country. Chang Cheh captures multiple shots just of the neon signs at night, sometimes even duplicating previous shots with extra angles. As a result, the mid-section of the film feels slower and more padded than it should be, and at only 90 minutes, that’s kind of a bad thing.

It’s not a deal breaker, though. Even if the mid-section has a bit too much fat, the first and third acts are both remarkably strong. The film opens with Chiang Ren’s thrilling prison escape, which is tensely filmed without music. The scene also is the first clue that The Angry Guest isn’t a film focusing specifically on realism. Either that, or there were a lot more prison breaks where the getaway car was a VW Bug and the convict reached said Bug via a grappling hook to the guard tower shot through the car’s sunroof. 🙂

The third act also holds up its end of the bargain by bringing in Bolo Yeung and team of Japanese thugs to battle the Jin Long school students. And what better place for this rumble than on a construction site? It allows for many inventive death scenes and Ti Lung wields a shovel like it were a Chinese spear, bloodying thugs’ faces and driving it hard into their spines. But while all that is well and good, you’ve never lived until you’ve seen David Chiang and Ti Lung saddle up in bulldozers and take out a few of Japanese underworld thugs (played by Chinese stuntmen, of course). But unlike many Shaw Brothers films that feature foreign villains, The Angry Guest actually has the main baddie, Katsu, portrayed by a Japanese actor (Kurata Yasuaki)! This was right at the beginning of his career (and his first film with the Shaw Brothers), and Kurata went on to have a long career in the Hong Kong film industry that includes facing off against Jet Li in Fist of Legend, and continues to this day.

There’s one more thing that makes The Angry Guest stand out, and it’s from that sagging mid-section. It’s also one of the best things about the entire film. Appearing in his first (of only two) acting roles is the legendary director Chang Cheh himself, and here he plays the Japanese boss Yamaguchi. But he doesn’t just play the normal heavy, he’s a total James Bond villain with a sky-high penthouse decked out with hidden panels, chic wallpaper, and sunglasses that look like something out of the future sections of Bill & Ted’s Excellent Adventure. His cameo is fantastic, so good in fact that it makes you wish he had a juicy cameo in all of his films.

The Angry Guest feels like a “What If?,” superhero, James Bond version of what might have happened to the brothers from Duel of Fists. It goes as hard into being over the top as Duel of Fists tried to be realistic. So, in this way, The Angry Guest is not a very good sequel, but at the same time it’s a fantastic sequel. If nothing else, it’s something completely different from the studio in terms of their martial arts films (they had already made a couple of true James Bond knock-offs in the ’60s). It may be a little slow through the middle, but trust me it’s quite the entertaining little Chang Cheh film, sandwiched in-between two of his serious, classic works (The Boxer from Shantung & The Water Margin).

And I guarantee you’ve never seen as many dudes as The Angry Guest has consecutively and furiously taking off their jackets on a construction site. It’s a sight to behold.

Next up in this chronological jaunt through the Shaw Brothers Martial Arts catalog: it’s another Chang Cheh film! This time it’s the historical epic The Water Margin! See ya next week!