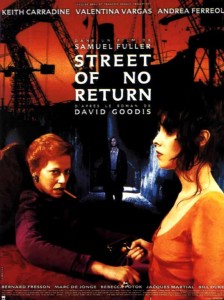 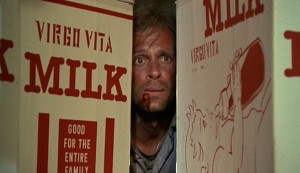 While desperately trying to reach the only unbroken bottle of whiskey on a top shelf, the man spots a red-haired woman that he recognizes from his pre-bum life. He silently follows her back to her home, and then catches a glimpse of a dark-haired woman that triggers a nearly 30-minute flashback sequence that (sort of) informs us of who these people are and how they came to be where they are (sort of). I say “sort of” because the film is never very direct (which is ironic in a Fuller film), but it does get its general point across. Slowly, and not very well, but I guess it could’ve been worse. At least there is a story in this one!

Due to the issues with the editing, and the general feeling of potential hanging around the fringes of the story, Street of No Return feels a lot like Shark!. Clearly for Sam Fuller fans, this isn’t the kind of thing you want to hear, but it’s the truth. I don’t think editing would solve all the problems, as there are inherent issues related to the lack of an adequate budget, but I do think that a lot of the film’s arthouse style could be pulped up to match the story and it would result in a much more entertaining and Fuller-esque picture. Here is yet another instance where I wish I could get ahold of Fuller’s original script to uncover what his true intentions for the film were. 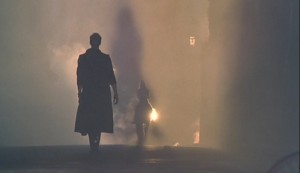 Through all the editing haze, the good news is that Street of No Return has a lot more vitality than Thieves After Dark did. Neither film contains anything close to the raw power exhibited in White Dog, but Street of No Return gets a lot closer. The film is filled with nicely composed, cinematic images, something that Thieves After Dark had very little of. The excellent composition here is even more impressive given the fact that the film was made completely on-location in Portugal, with Fuller drawing inspiration and making the most out of what was available to the low-budget production.

Many of the film’s individual scenes are exciting and interesting unto themselves, but they don’t really add up to a movie that draws you in and makes you care. Keith Carradine does the best with what he’s given, but some of the writing feels at odds with his character. I mean, if I were taken in by the police for a murder I didn’t commit, even if I could only talk in a raised whisper, I think I’d try to explain myself instead of just going along with the cops without much of a fight.

Street of No Return is another late-period San Fuller film strictly for the hardcore completionist Sam Fuller fans. All others should spend their time on another street.