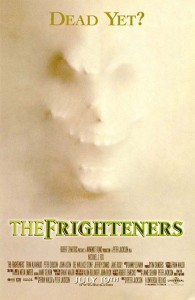 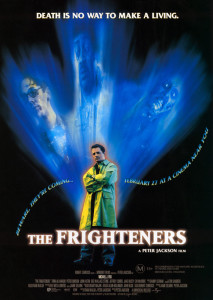 Frank Bannister (Michael J. Fox) is a paranormal investigator that most people in the town of Fairwater believe to be a con man preying on those who believe in the supernatural. This actually isn’t too far from the truth, but Frank can actually see and converse with ghosts. One night, while on a call, he sees a fiery number carved into one of his client’s foreheads. This brings us into the real plot of the film, the mysterious deaths by sudden heart attack that have plagued the town for the last few years. But even this mystery isn’t always the main drive of the film, as the film is ready and willing to take side jaunts whenever it sees fit. But this isn’t a bad thing — it’s exactly what makes this movie great.

Much like Bad Taste or Dead Alive, once Peter Jackson gets it rolling The Frighteners is a non-stop express train through many awesome, imaginative set pieces. This is one wild, manic film, and Jackson’s ability to wrangle traditional horror, horror comedy and genuine emotion serve the film very well. Sure, it’s watered down from the gorefest bonanza of Dead Alive, but The Frighteners is still a very similar film in the way it packs as much as it can into its runtime. The focus is shifted and much different from Dead Alive, though, making The Frighteners both a better film in a “Hollywood” sense, and a worse film in the overall filmography of Peter Jackson. But just taken on its own, there are few original ’90s Hollywood films with even half as much invention and imagination as Jackson has crammed into The Frighteners. 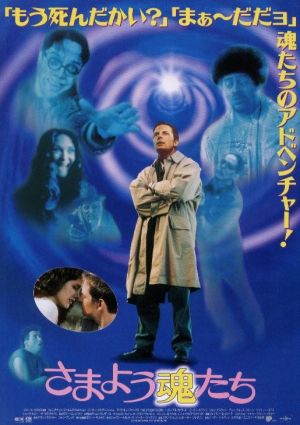 The film is notable for its extended use of computer FX, the first time Jackson went into the deep end of the digital playground. At times, the FX reminded me why I developed such a deep case of hatred for CG, but for the most part I thought the FX held up pretty well. It definitely looks like early CG, but they go to great lengths to make it integrate well. And with a story this wild, small issues with FX not looking real shouldn’t sink the film. It’s fun because of how daring they are at times with the FX, and those that work continue to look as great as they ever did.

But what really holds The Frighteners together are all the fantastic performances, shot energetically and beautifully through Peter Jackson’s moving camera. Having grown up watching and re-watching Back to the Future and its sequels, Michael J. Fox was always a favorite and he handles this role perfectly. There are shades of Marty McFly, especially when another character reminds HARD of Biff Tannen, but Fox’s character stands out as the psychologically frustrated and haunted character that the film needs, instead of just being “another Marty.” Trini Alvarado is also a perfect second lead to Fox, and their screen chemistry is palpable. They’re so good together that I wish there were a sequel! They could have called it The Frighteners 2: The Frightening :).

Jake Busey and Dee Wallace also turn in excellent performances in their respective roles, but the actor that I’m most happy to see on-screen is Jeffrey Combs. Not only is it great to see him out of the low-budget horror films he’s usually stuck in, Peter Jackson wrote an absolutely incredible, over-the-top weirdo for him to play and Combs blows it away. I don’t want to give anything of the character away, but trust me, the guy is unforgettable. Someone give Jeffrey Combs another meaty role!

The Frighteners is a great night’s entertainment for those ready for anything. Through the varied tone it carries, it feels like something that should’ve come out of the ’80s, as most films by the mid-’90s had eschewed the madcap fun for a focus on pseudo-realism. I should note that as much as I like this one, I also recognize it as a film that’s not for everyone, so only seek it out if you’ve got a twisted sense of humor.