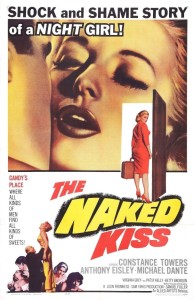 Sam Fuller always kicks off his movies with something gripping and impressive, but the opening of The Naked Kiss is perhaps the most memorable of them all. The film opens with Kelly (Constance Towers), a prostitute, beating the living hell out of the pimp that stiffed her of $75. In the scuffle, Kelly’s wig falls off and reveals that she has a completely bald head. Unfazed, Kelly continues giving the pimp everything she’s got. It’s a striking set of images to say the least, made all the more impressive by the year of release. The Naked Kiss is definitely the type of movie that could have never been made from within the studio system.

From here, the film jumps forward a couple of years. We reconnect with Kelly as she arrives in Grantville, an idyllic small town. Her first contact is with Griff, the local police chief. He’s quick on the uptake, seeing through her “traveling champagne saleswoman” ruse for what it is, a thinly veiled front for a roving prostitution business. But after her night with Griff, Kelly wakes up and stares at herself in the mirror. Something’s changed, and from that moment on she does her best to start a new life for herself in Grantville. The only problem is that Griff wants her to get a job at the cathouse across the river, so that he can still slyly partake in her pleasures without jeopardizing his job. 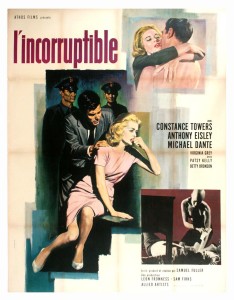 Kelly is one of Fuller’s best written characters and Constance Towers does an excellent job of bringing her to life. The character requires a broad range of feelings and emotions and Towers handles everything from the hardened, angry prostitute to the motherly nurse of handicapped children with ease. Certain moments are surely a bit too melodramatic, but that’s to be expected in a film like this. And besides, with a plot as sordid as this one, the melodrama fits in nicely.

The plot is also something of a slow-burn, but its intricacies are many. There are a lot of stories with the “small town isn’t what it seems to be on the surface” story, but this is easily one of the best. Rising out of Fuller’s background in the tabloid newspapers, the story is rich and filled with subtext that keeps the intellectual side of your mind active while the more visceral side is equally satiated by the overt nature of the film. This type of filmmaking is very tough to pull off, but Fuller is an absolute master. Fuller has great films in every era of his career — many of which I like more than this one — but The Naked Kiss might just be his best film, all things considered. It feels like a master fully in control of his craft. The film is both straightforward and abstract, blending reality and fantasy, hopes and dreams, desires and deceits so well that I can’t believe my younger self didn’t think this was much of a movie. I guess that’s what happens when you see a movie you’re not ready for.

And even today, I’m unsure that I am fully grasping many of the themes Fuller has woven into the film. As Kelly attempts to start a new life, many scenes relate to the overall struggle of trying to heal yourself or your self-image. She helps the handicapped children to see themselves as more than their disabilities, caring for those that many have a hard time loving because of their differences from “the norm.” They are similar to Kelly in this way, and through her understanding of their pain, they come to trust her. This leads to many moments of Kelly as a mother figure to those that are unaware of her past life, while those that are aware constantly try to control her with that knowledge and put her down. They don’t want her to succeed or change, they wish to bring her down to their level. They want to define her by what they believe her to be, instead of what she’s proven herself to be capable of. She is disabled in their eyes. Kelly may have left the city to find a new life, but assholes are everywhere.

The Naked Kiss is one Fuller’s best scripts, a stunning, shocking character piece for the ages. The black-and-white cinematography casts deep shadows on the world of the small town, showing the truth of these characters who’d rather protect their own interests than be truthful and treat Kelly with the respect she deserves. The Naked Kiss is one to watch and re-watch, so one can properly dissect and distill its scenes down to their base components. Fuller was never a filmmaker known for his subtlety, but with The Naked Kiss he proves that he could not only wield this skill efficiently, he could do it better than just about anyone else while also throwing trashy, sordid elements at us just as well. It’s a more challenging film than many of Sam Fuller’s works, but careful viewers will find much to like here.