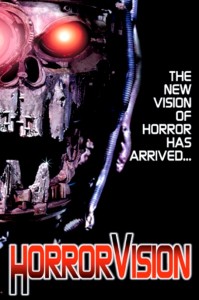 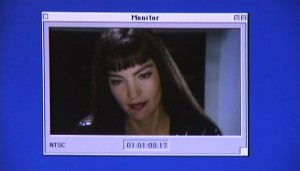 This opening suggests a film similar to what the premise suggests, but Horrorvision goes well beyond this. The first inkling that there’s more at work here comes when Dez and his goth girlfriend, Dazzy, go to Toni’s apartment to get the content CD. When they step out of the elevator there’s a pale-faced kid in the corner fondling a motherboard. Let no one say that Horrorvision has no original ideas. It’s a creepy, hilarious image, especially the sensual close-ups of the board’s capacitors.

From there, Horrorvision continues to descend down a fantasy horror path, delivering things like a pint-sized, murderous armadillo construct that emerges from any device with an Internet connection, as well as a few outstandingly high-concept ideas too good to spoil (but that the DVD box has no shame in spoiling).  The logic that governs the fantasy and the film’s narrative isn’t sound AT ALL, but who cares? It’s a good load of B-Movie fun. 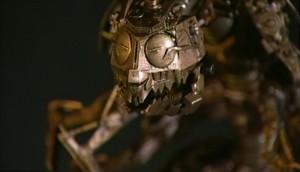 Horrorvision was Danny Draven’s first directorial effort for Full Moon (and his first feature), a partnership that has been going strong all the way up to 2012’s abysmal Reel Evil. That film was something of a “comeback,” as after 2003’s Darkwalker he had only been involved in other capacities — mostly as an editor — on many of Full Moon’s films in the intervening years. Anyway, for a first feature this is a pretty good effort. Not in terms of things like Citizen Kane or The Evil Dead, but this is a 2001 Full Moon film and Horrorvision is pretty good when considered in this light.

And besides, how many movies can boast that their heartfelt, emotional moment centers around a monologue about someone’s love of the film Krush Groove? It’s too insane not to laugh heartily and enjoy. Also, I have to give a shout-out to James Black, who gave the best performance of the film as the mysterious dude in the trench coat who helps Dez get to the bottom of this killer website business. Horrorvision isn’t a great film, but it provides a lot of fun entertainment for its extreme low budget, and there isn’t much more you can ask of a film of this caliber.

Next time on Full Moon Tuesday, I’ll be checking out Buy & Cell, the 1987 comedy about investment trading while in prison. See ya then!