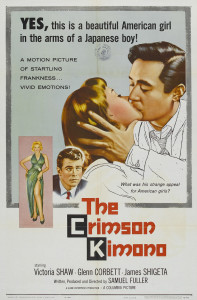 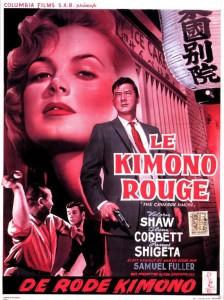 Both the first time I watched The Crimson Kimono and this time, I was struck by the careful reverence with which Fuller treated the Japanese culture and customs. While Joe is on the hunt for a Korean man, he first must get info on where he is from an older Japanese man. The man agrees to help Joe, but first they visit the older man’s son at a local Buddhist temple for a memorial service. As an audience, we too sit in on the service, taking in its quiet calm. Its place and meaning to the film’s narrative is relatively insignificant, but this moment of culture, and many more like it, enrich The Crimson Kimono far beyond what it would have been as a simple noir investigation story. We have transcended a film story and gone into actually learning about another culture. I’m sure some of it is simple “exotic flair,” meant to bring something new and fresh to the screen, but it serves multiple purposes, especially when seen many years after release.

But even beyond these moments of culture, what really elevates it past simple noir is the love story contained within. I generally don’t think that Fuller is much for writing convincing love stories, but I buy the one here rather well. It’s still melodramatic and a bit too quick, but that’s more the times than anything else I’d reckon. Anyway, as Charlie and Joe are reaching for leads in the case, a painting of the burlesque dancer in a crimson kimono leads them to Christine Downs, a beautiful female artist who quickly captures the men’s romantic attentions.

Christine also changes the course of the film from its police procedural, noir structure into something much more daring and impressive. The film transitions into a racially charged love triangle, and being from the mind of Sam Fuller, it confronts racism head-on. But the racism confronted here isn’t of the traditional variety. We’re asked to examine a racism that lies within the mind, something that manifests itself in us whenever we see a look on someone’s face that we “know” means a certain thing. This principle doesn’t specifically apply only to racism, but to all things, and the ultimate lesson that “When you’re all up in your head, you don’t actually have all the facts” is a good one to always keep tucked away in your mind. 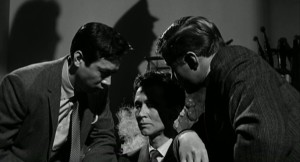 The Crimson Kimono is destined to be talked about as a minor Fuller film because it’s not as dynamite and solid as his best work, but it’s still one of my favorites. I love the deep, nuanced characters and their relationships feel natural and believable. It definitely meanders a bit during its first half, but part of that meandering and lingering within the culture of the Japanese American is exactly what makes it such an interesting and notable film.

But past the excellent writing, the snappy editing and the slick camera movements, I especially love the lead performance from James Shigeta. He gives a fantastic performance, which is even more impressive when you know that it was his film debut. He imbues Joe with all kinds of emotions running under the surface; his face is an ocean of expression. I was also very pleasantly surprised and joyful to learn that James Shigeta later went on to play Joe Takagi, the President of Nakatomi Trading in one of my all-time favorite films, Die Hard.

The Crimson Kimono is a highly interesting film, and one that packs a ton of punch into a very slim 81 minutes. It’s definitely not the most popular or well-known of Fuller’s films, but it’s easily one of my favorites.

No trailer to be found, but here’s a good clip.