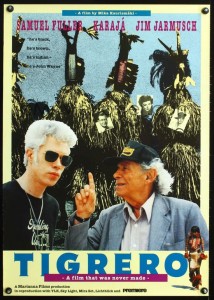 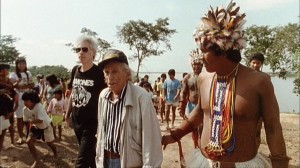 Except that Fuller wasn’t the kind of man to think that way, instead the short time he spent in the jungle with the Karajá villagers stuck with him over the years and he often thought of returning. The early ’90s were a good time for Fuller, as many of the up-and-coming filmmakers were big fans and became friends with him. Through the work of Fuller’s wife, Christa, and director Mika Kaurismäki, they got the idea off the ground, and soon Fuller and Jarmusch were setting off into the jungle. Fuller hoped to find the people he once met, to show them the footage of their relatives, and hopefully they would remember him being there.

All of Fuller’s desires do indeed come true, as even through the language barriers, some of the villagers recognize him and his trademark cigars. Even more interesting, though, are the people who don’t specifically remember him, but remember the people on the film that have since died. One man is spiritually moved upon seeing his father, telling Fuller later that watching the footage made it feel like, “He was alive again.” 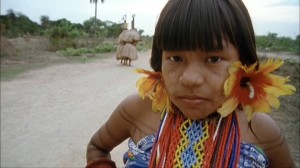 Fuller seems very at ease and happy to be there, interacting with the natives, while Jarmusch is definitely a lot more detached. This works to the film’s advantage as it creates something of a conflict between the old and the new, but even though Jarmusch is clearly taking the experience in and learning from Fuller, he does come off as the disinterested ’90s dude more than a few times. I’m sure it was all much more affecting than the camera shows, but I can only comment on the film itself.

Now since this is subtitled “A Film That Was Never Made,” they do delve into what Tigrero the ’50s film was to be. It would’ve opened in traditional slam-bang Fuller style, depicting a brutal circle of life in the animal kingdom. A white bird lands on the surface of a river. A crocodile slowly swims over and grabs the bird in its mouth. Soon after, another croc comes and fights the first for the bird. While that’s happening, the camera follows the spread of the blood in the water to a school of piranhas, who then swim over and devour the crocodiles, leaving only their bones in their wake. Finally, a white bird swoops in, snags a piranha out of the water, and a gigantic TIGRERO comes on-screen. Now that’s how you open a fucking movie! I have no idea how Fuller meant to achieve all of that in one shot, but it would’ve been incredible! 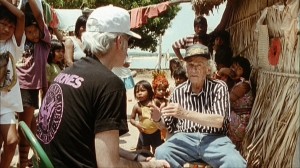 Fuller delves into the plot a bit as well, relating the yarn he came up with while visiting the Karajá people. There are slight shades of China Gate within this tale, so I’m sure he took what he could from the failed script to bolster his latest creation. Anyway, Tigrero sounds like it would’ve been a stellar piece of work, especially if it were actually shot on location in Brazil like intended. In the 1950s, location shooting was something of a rarity (although it was definitely gaining favor), and Fuller’s insight on why it was better struck a real chord with me. He states in the film that directors that shot on location, especially if they had also written the script, would always adjust their movie to be more accurate to the reality they saw. True realism can never come from a faraway Hollywood screenwriting office, and Fuller always knew this.

It’s this adherence and dedication to always providing the most real experience he could that always enthralls me and lifts his films above others from the period. It’s hard for me to go back to the traditional ’50s filmmaking styles after delving deep into Fuller’s uncompromising worlds. This isn’t to say that Fuller’s films were hyper-realistic tales stripped free of all fiction. In fact, many of his stories are very melodramatic and over the top, but each one of his films is laced with a reality that is undeniable. Especially in his war pictures, where small details give something he filmed in the ’50s more in common with a film from the ’90s. Fuller was always true to the world he experienced around him, dispelling bullshit whenever he could.

It’s a shame Tigrero never got made, but if it had I’m sure it would’ve sent his career into a different spiral and we might never have gotten the later films that we did. This is always an interesting principle to consider, the “what might have been if…” question that crops up often in humanity. We can only accept what has happened and move forward, much like Fuller did after the demise of Tigrero. This Tigrero isn’t a particularly great documentary, but for Fuller fans it is absolutely essential.

I couldn’t find a trailer, but here’s a part of the intro.