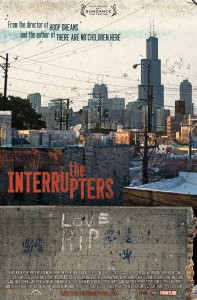 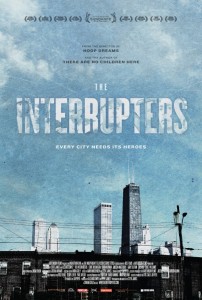 While watching the film, there was a short moment when the funding of the group was mentioned in passing. One of the interrupter’s wives related a story about how her husband didn’t have a job, but he continued working with CeaseFire because he had to. It was his calling, he needed to do it. The funding would come, and it would all work out. It did come, and it did all work out, and her husband is one of the most successful interrupters in the group. But this mention of the funding frustrated me, not at anything in the film, but at the glacier that is American politics.

Over the past 12 years, our country has been engaged in the “War on Terror,” spending trillions of dollars to fight wars in the name of “defense.” All the while, in America, the deep-seeded problems of gun violence, poverty, and all kinds of socioeconomic issues continue to grow unchecked, and without much interest from our government. If there was a fundamental change in American domestic policy, if we stood up to the problems on our soil in the same way that we love to defend freedom across the globe, this country would be a better place for every one of us. The streets are the real American war zone, and one day I hope the politicians realize this in time to still make a difference.

The film makes a great point about impulsive anger, as well. A teenage girl’s brother had recently been shot and killed. She had done well in school, but after her brother’s death, her grades started slipping and she apparently got into a fight at school. The interrupter working with her relates to us how she may have come to this small act of violence, and how these angry action are rarely over anything significant. A series of emotions and bad situations have created someone ready to lash out, and all it takes is the person in the school hallway who bumps into you without saying sorry to take you from “zero to rage,” sending you down the wrong path. It’s situations like this where the interrupters can step in and offer their wisdom, and show the people going through this that the anger they’re feeling is deeper than the altercation in the moment.

The Interrupters is an impeccably well-made film, shot and edited flawlessly. But it is a very hard film to watch because the subject is real, gritty and doesn’t pull any punches. Violence solves nothing, that’s a known quantity, but the interrupters in the film offer a different, personal way to bring people together and diffuse the anger. As a nation, we’re not beyond the point of no return, and The Interrupters shows that hope is alive and well in Chicago.