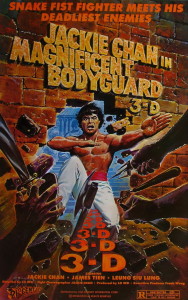 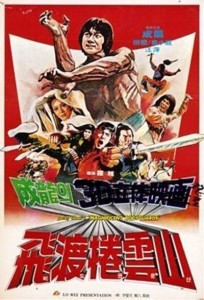 This is a shame on a number of levels, but as soon as I realized that Jackie’s deaf, leather-workin’ buddy was played by none other than Bruce Leung, the film hit a new low. You’d hope that two great fighters together in one movie would really light up the screen, but their charisma is largely hampered by the film’s (and Lo Wei’s) limited aspirations. Rushed into production after Half a Loaf of Kung Fu was shelved, I have a theory that Magnificent Bodyguards was something of a punishment for Jackie. You want to waste my money on stupid kung fu comedies that no one wants to see? You want to be a big personality? Well, you can start by leading this movie where you will have no personality, no character and no hope of showing your “talents.” I have no evidence for this, but it definitely seems plausible given Lo Wei’s continued misunderstanding of Jackie’s talents.

What I do know is that Magnificent Bodyguards is about Lady Nan and her sickly brother (who must remain in his traveling sedan) hiring Jackie as their bodyguard, and asking him to escort them through the treacherous and bandit-filled Stormy Mountains. Along the way he picks up a couple of extra members to the party, and there’s a lot of twists and turns in the plotting to create intrigue. I have to give them credit for a really fun final reveal, but it’s definitely a little slow and plodding to get there. The story reminds me a lot of second-tier Hollywood Westerns, meaning that it’s a lot of dumb, harmless fun. If you don’t expect Snake in the Eagle’s Shadow, you won’t be too disappointed.

Wuxia films often suffer from over-scripting, shoveling on the plot twists and characters like a kid at a self-serve, ice cream sprinkle station. Magnificent Bodyguards is no different, even though its Western framework promises something of a different kind of wuxia film in its first act. And that’s the real heart of the matter: wasted potential. Jackie Chan! Bruce Leung! 3D! Hell, there’s a character whose special ability is to rip people’s faces off when he fights them, for crying out loud! How do you squander such brilliance? … To be fair, the face-rippings that are in the movie are HORRIFIC, and I mean that in the best possible way. The first time it happened I sat with my mouth agape for close to 30 seconds and I had to re-watch it a handful of times. It looks great, even if they did completely waste the ability for most of the film.

But despite the film’s best efforts to craft a story that we might care about, and Jackie’s best efforts to craft good fight scenes, the only really memorable thing about Magnificent Bodyguards is its 3D. I know I already talked a good deal about it, but there’s not much else of worth in this movie. Which is sad, because I didn’t even watch this in 3D! The third dimension seems to be handled impressively well, though, with lots of reverse filming facilitating precise shots of all manner of weapons (most notably staffs and darts) being thrown directly at the lens of the camera. I’ll never cease to be amazed by how impressive reverse filming can be, and some of these shots look almost CG in their weirdness. The stuff coming at the camera isn’t just limited to weapons, either; there’s a fair amount of kicks and punches, along with some rocks and a stray wine jug. Lo Wei definitely gives you your 3D money’s worth here.

Magnificent Bodyguards isn’t a bad movie, but it’s definitely skirting the edge in a lot of places. I had fun with it, but I couldn’t help thinking about how much I just wanted to get through it so that I could watch Drunken Master again. 🙂 The film also brazenly uses a good chunk of Star Wars music for its score, which is a lot more innocuous than it might sound. It’s strange to hear it playing over non-galactic visuals, but it worked well-enough. Magnificent Bodyguards also has a few good wuxia names, notably: God of Darts (AKA Wu of a Thousand Hands), The Scholar, Fake Monk and Old Wolf. There’s also a room named “The Chamber of Monster Bells,” which I thought was hilarious.

There are both better and worse JC movies out there, but none of them have crazy shit flying at the screen like Magnificent Bodyguards does. For that alone, I’d say it’s worth giving a shot.

Next up in this chronological journey through the films of Jackie Chan is the second of Jackie’s films with Yuen Woo-Ping: the one, the only Drunken Master! Can’t wait.