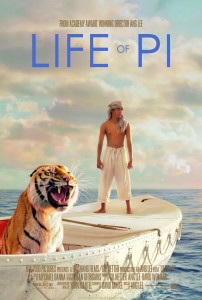 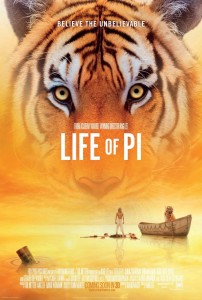 The question of liking Life of Pi hinges on your openness to the central conceit of all religion: faith. This is not to say that only those with faith will like the film, but you do have to be open to the idea of faith in some form. The story is not connected to any one religion, it is simply a human story of survival and hope. It’s a very well-written story on faith too, as Pi’s story is rather unbelievable, and it is up to us to accept or reject it on the basis of our own faith in it and the unknown world surrounding us.

This leap of faith is also echoed in our ability to accept the special FX that populate much of the film’s scenes. You can’t expect them to actually throw a 16-year-old kid and a Bengal tiger onto the high seas and call action, so obviously a lot of this is visual trickery. Everything looked great, and at times I was convinced there had to have been an actual tiger in the boat. What I found the most interesting, though, was how the use of CG (in this film, and also films in general) asks a similar question of the audience that the film itself it asking at a broader level. Do we suspend our disbelief, our logical thought, to accept what we see before us? Do we choose to believe in the fantasy knowingly created for us, because it’s nicer than the logical reality that it’s all a bunch of carefully constructed ones and zeroes? As humans we want to believe in something, whether it’s the second coming of Christ or the “inevitable” zombie apocalypse. There is an in-born desire to want for something other than our current existence. Life of Pi captures that struggle with reality rather well, it just may have lightened my feelings on CG in general, as well.

Life of Pi essentially sets the same question in front of us that many Woody Allen films — most recently You Will Meet a Tall Dark Stranger — have before. But Ang Lee puts forth the question in ways that Allen never could (or would), resulting in a film that works as a fantasy film, as a human drama, and as an existential question. I don’t think it’s an especially great film, but I have to respect a film that can succinctly put forth these types of themes while also doing fantastic box office numbers. Life of Pi is a fantasy tale, a parable almost, and it’s one that any thoughtful viewer will contemplate for a while after the film. Definitely check it out if you like to ponder unanswerable questions.