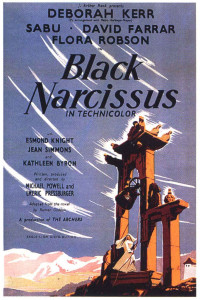 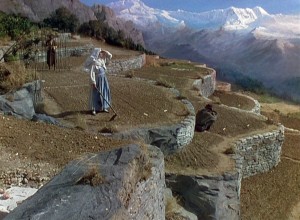 Another factor would be the rugged, sexual man who is the local British agent, and their general handyman. He doesn’t force himself on the nuns, but through his brusk good looks and his flippant attitude, a couple of the nuns become infatuated with him. Our lead character, Sister Superior Clodagh (Deborah Kerr), even finds herself recalling a long-forgotten relationship from before her entrance into the order. This lack of focus from the nuns’ young leader could also be pointed to as a reason for the nuns’ slow loss of faith. Even an elder shirks her duties as she is so taken by the beauty of the natural surroundings at the convent, planting only beautiful flowers where there should be food. The nuns have lost all practical sense, and are moving rudderless through the stream of life. I think instead of trying to pinpoint their failings on one of these factors, all should be considered as working together on the group. The most significant, though, is probably the inexperience and youthfulness of Sister Superior Clodagh. You can bet your last dollar that if the Reverend Mother were there, everyone would have been kept in shipshape order. 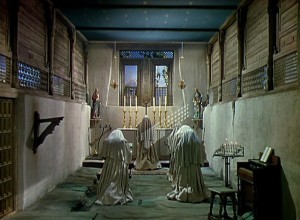 I remember looking the movie up 10 or so years ago and finding the old DVD cover of Deborah Kerr in her full nun’s habit. It didn’t do much to make me want to see the film, as it made it seem like a boring religious drama. While religion fascinates me in some ways, I am very much a lapsed Catholic so I actively avoided it for a while. I was glad to find that it’s definitely not a boring religious drama, in fact it rarely even brings up religion, even though a good portion of its internal struggle is about questioning one’s faith. Although even that is somewhat wrong, as the film rarely delves into faith itself. It’s more about how when a human is confronted with something they find beautiful, it is only natural to respond to it, regardless of the mental roadblocks one may have set up to limit their interaction with such things. I don’t know if that explains much of anything, but I’m sure there’s a quicker way to say that. 🙂

Now, can I just get a round of applause for Technicolor? A lot of praise gets thrown its way by hardcore film fans, to the point that even non-fiends know its name. Anything like that is bound to be over-hyped, but each time I am confronted with a Technicolor film I am astounded and floored at how rich, vibrant and impressive the colors are. And in the hands of one of the greatest cinematographers of all time, Jack Cardiff, Black Narcissus is like a cinematographic orgasm. Like the nuns in the film taken by the varying beauty surrounding them, any true lover of film could not watch a Technicolor film made with this much skill and not come away touting the brilliance of the colors before them. It’s hard to even think of this as a ’40s film because its cinematography is so modern and unique. Color wasn’t an everyday occurrence in films of the day, so to use it as well as it is here, crafting incredibly memorable images throughout the film, is absolutely commendable. That being said, The Red Shoes, Powell & Pressburger’s next film after this is even better in this regard thanks to the story facilitating a lot more fantastic elements and bold uses of color. 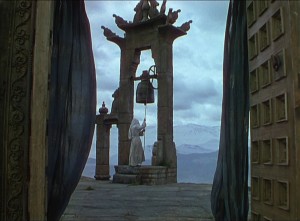 But at the end of the day, I wasn’t crazy about Black Narcissus. I liked it quite a bit, and I respect it a lot, but it’s not a film I’ll be eager to revisit. I do think it would only get better on re-watches, though, as the intricacies of its melodramatic, yet still somehow subtle, plot would reveal themselves more fully. If you love classic cinema, this is a shoe-in for one to watch, although I’d say it’s more of one to hit up after you’ve already seen the top-level stuff than a true must-see. But that’s me.

And on a side note, I think an alternate title for this review series could be, “The Challenging to Review” series, as each film so far has been something of a beast to wrap my brain around when writing about it.

Black Narcissus was a part of the 2013 Blind Spot Series where I see one movie a month that I feel I should’ve seen a long time ago. It’s all the brainchild of Ryan McNeil over at The Matinee, one of the web’s premiere film blogs. Head over there to check out his post for this month, featuring Broadcast News, as well as links to all the other people taking part in the series.