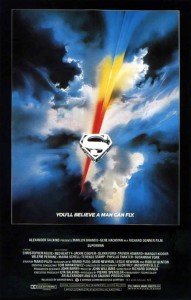 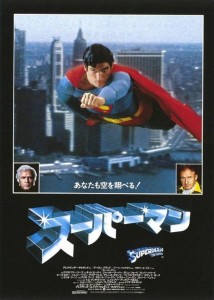 But here I am ramblin’ on about Superman II and I haven’t even watched it yet! While it might have been prudent to edit these bits out, I decided to keep them in because they illustrate perfectly the frame of mind that Superman left me in: pure, childlike excitement. I remember the feeling I used to get watching these Christopher Reeve Superman movies when I was a kid, but for many years I disregarded them because I felt bored by the character. “He can do anything… who cares? I can’t relate to that,” I thought. But I was missing the point completely. Superman, the superhero who can do anything, is notable because he can do anything! That means that the circumstances he finds himself in must be HUGE! In this movie Superman single-handedly lifts a tectonic plate, for God’s sake; how can a comic fan not get excited by something like that?

A lot of this raving fanboy emotion stems directly from the film’s FX work, and how well-realized it all is. For instance, when Superman is under the crust of the Earth, everything is red, molten and stylized in just the right way to make it thrilling and believable. In some ways, it’s probably believable because I want to believe, but hey, if you’re reading this I’m going to assume you’re in a similar boat and not completely closed off to this kind of stuff. But while underground-based fantasy may be nice, the real linchpin to the success of Superman is the flying, as evidenced by the film’s tagline. If the flying looked dumb, the whole film would crumble, no matter how good everything else was. And the marketing department had the balls to call attention to it on the poster? It’s the kind of boast that under different circumstances might have been accompanied by a money-back guarantee, and if it were, I can’t imagine they’d have had to pay much out, because… well… the flying is awesome.

The film knows what it has going for it, too, and one of the best instances of this, actively toying with the audience’s expectations, comes right at the opening. The film begins with a theater showing a B & W short about Superman in the old Academy ratio screen size, recalling past incarnations of the character in the serials and TV’s Adventures of Superman. The nostalgic moment is then completely shattered by a truly amazing credit sequence that grows right out of the old-school screen and blasts into widescreen color. This technique has been used in many films looking to make such an impact, most recently Oz: The Great and Powerful, but here I found it especially effective. It’s like Richard Donner’s version of Paul Hogan’s classic line about a knife in Crocodile Dundee, “That’s not Superman… This is Superman!” 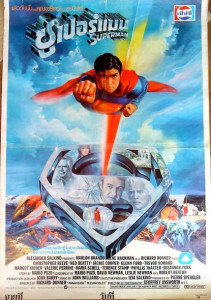 There are some small issues that I could have with the film, but I simply can’t let a couple of little things mar a great experience. Some of it wasn’t even a problem, it was just me noticing how ’70s a lot of it felt at times, in the same way that watching a great movie from 2013 will inevitably feel like a product of its time when seen 35 years later. Rarely can an artistic work completely transcend its time, even the great ones, and Superman is no different. But that’s no reason to discredit it. There are also a few things with Lex Luthor that don’t make sense, but I quickly wrote those off because this is a comic book movie and it’s more about having fun than nitpicking. Do I really need to question where Luthor got a mobile home on a truck within a few seconds? Does it matter? I’d say not, but I can understand others not sharing my position, especially if they are younger and didn’t grow up with a huge love of the character and these specific films.

But I think naysayers would have to concede that the lengthy action finale involving Superman doing non-stop acts of heroism is a thrilling piece of editing and filmmaking. Even amidst the current cavalcade of superhero films, I’d argue that this sequence still stands as one of the best in the genre. The FX work is so good that many of the shots are seamless, and even the ones that aren’t still look pretty great, especially so if you’re really engaged with the action. And topping off all the awesome of the finale, the film ends with Superman flying into space and winking at the camera as if to say, “Yeah, I’m dope.”

Superman was an absolute triumph of fantasy and science fiction filmmaking in its day, and it continues to influence superhero films and general blockbusters alike. Through my teenage years and into my adulthood, I may have been somewhat ashamed of my love of these movies, pushing Superman and its sequels aside as relics of my childhood, but watching Superman tonight fully rekindled my childhood love of the character. Richard Donner’s Superman was always one of my favorite films growing up and I’m as shocked as anyone to realize that it’s just as good now as it was then. Superman resurrected the kid inside me, and it feels so good. It wasn’t you, Superman, it was me, and I hope I never forget how much fun you are to have around.