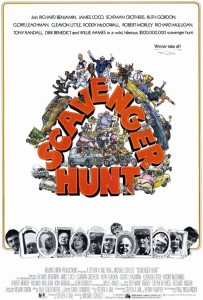 Hey you vultures! You want a review of Scavenger Hunt? Well, alright then! I’ll give you one! You’ve got till 5 PM Pacific Time to collect all kinds of crazy stuff and bring it back here, and whoever has the most points wins!

Here’s what you’re looking for:

Update: 5 PM has come and gone! It’s all over, folks! Hit the break for the review… you’ve earned it! 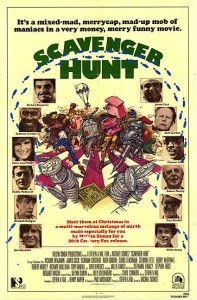 Whew, what a whirlwind of a day, amirite? Ca-Razy! And the winner is everyone!

So as you might have gathered, Scavenger Hunt is about a scavenger hunt. But not just any scavenger hunt, one with $200 million on the line! When game mogul Milton Parker (get it?) dies while testing out his newest game that looks like a strange, mechanical, wall-hung mash-up of Frogger and The Game of Life (two years before Frogger even existed). Thankfully for those awaiting — I mean, mourning — his death, Milton recorded a cassette with his wishes for the dispersal of his wealth. And since Milton loved games, the interested parties must collect as many of the random items listed above (and more) and whoever has the most points wins the money! So fight for it, you vultures! And in terms of plot, that’s it!

The rest of the film is pure antics, as in non-stop madcap, abrasive antics. But amidst all the crazy, and all the yelling, is a lot of funny. You’ve got to like absurd, over-the-top humor, though, so don’t even bother if that’s not you. But for those inclined to laugh heartily at three grown men walking into a high-brow hotel bathroom and overtly stealing a toilet without first turning off the water, then you’re in for a good time.

But it could be a better time, as there are a lot of jokes that go on too long, or just fall flat. I’m sure some of that is because I’m a little too young to have lived through this era so some of the jokes, cameos and references don’t mean anything to me, but overall it’s probably more related to the fact that the film is simply jammed full of so much stuff. With five teams of people vying for the money, all going after objects around town (and randomly, they aren’t fighting for the exact same items at the same locations), it’s a lot to keep up with and follow. That’s also where the paper thin plot comes in, as you can easily zone out for a few minutes to collect your marbles and then dive right back into the nonsense without missing much. I could make lots of arguments either way for this movie (which is why it’s rated rather low), but at the end of the day I enjoyed this one quite a bit. 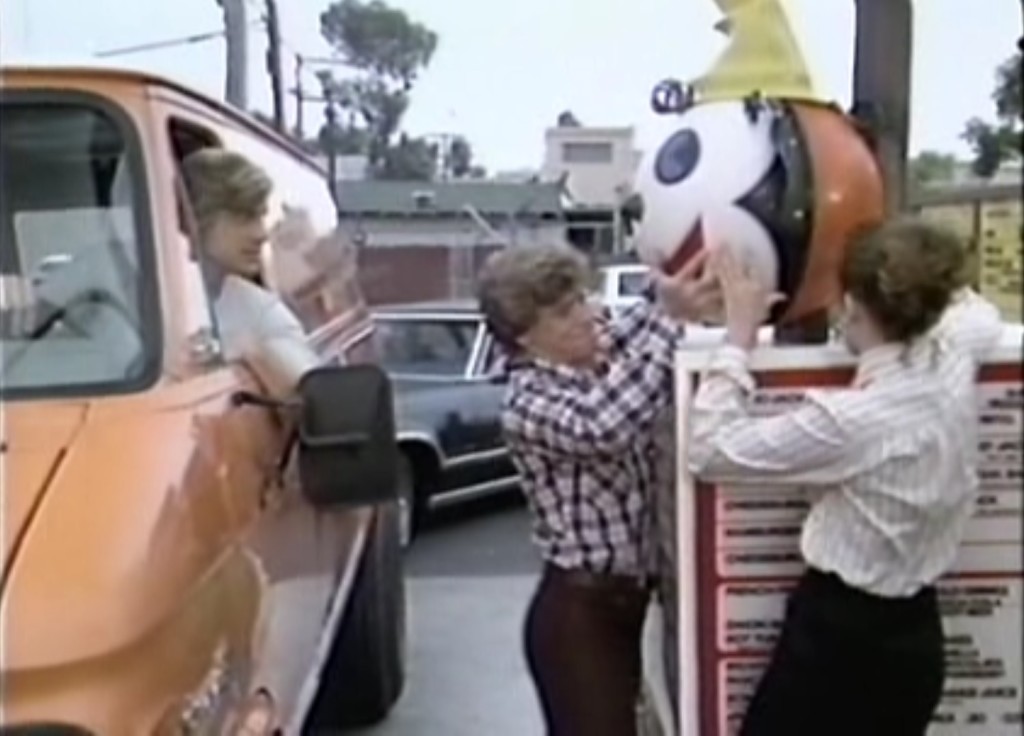 But why did I select this film out of the multitude of others available to me, you ask? Well, I watched it because I had thought that the one, the only Arnold Schwarzenegger was one of the hunters. Turns out he’s just one of the many cameos, as a fitness instructor who Tony Randall runs into on his search for a medicine ball.

Even though Arnold’s part was over before it really began, it was a memorable one. Arnold enthusiastically welcomes Randall to the gym, immediately putting him to the task of running on a treadmill at a breakneck pace. This then leads to Arnold throwing a medicine ball at the man, the power of the throw sending him out the 2nd story window to the sidewalk below. I don’t know about you, but that’s what I call entertainment! 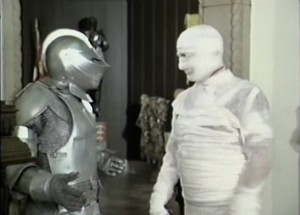 Y’know what else I call entertainment? ’70s car chases! And what better way to end a crazy, non-stop antics film of the ’70s than with a nutso car chase through the streets of San Diego involving a convertible Cadillac; an orange, sorta A-Team-looking van driven by Dirk Benedict; a few cop cars; and another big ole land yacht car? Brilliant! If I learned anything from The Blues Brothers, it’s that there ain’t nothin’ like a car crashing through store windows and other random stuff, and while Scavenger Hunt doesn’t deliver thrills anywhere close to the ones in The Blues Brothers, it still had more than enough to satisfy my cravings.

And I haven’t even talked about some of the funniest and most absurd stuff in this movie! I particularly enjoyed bribing the fat guy into the van with a never-ending stream of Jack in the Box food (although I think I got even more of a kick out of the fact that they even had the food, meaning that the team must have stayed in the drive-thru line to pay for and pick up their order after stealing the giant Jack head off the outdoor menu). And what about bushy mustached Avery Schreiber doing his best Daffy Duck as the ostrich keeper? Every time he came on-screen, I thought, “OK, this is getting old,” and then I’d start laughing again.

Unfortunately, Scavenger Hunt is rather hard to find at this point, only available on an out-of-print VHS. I’d love to believe that the reason it has never been released to DVD is some gigantic ARG on the part of 20th Century Fox to see who is truly prepared to go on a scavenger hunt to watch Scavenger Hunt. Go on, hunt it down absurd comedy fans; you won’t regret it.