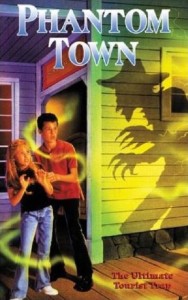 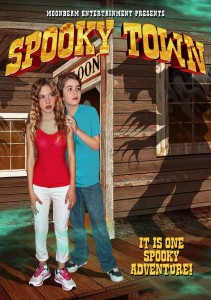 I also forgot one thing from that list of stuff: gore. Kids movies don’t generally have any sort of graphic violence, but Phantom Town takes a page out of Troll 2‘s book and gives us a fair amount of gore via the use of green blood. They aren’t bleeding, Little Johnny, they’re oozing green stuff! Very different from bleeding! You might be able to quickly explain away green blood to your six-year-old, but try that same line when the evil, body-snatched Daddy gets his arm ripped off in a car door. For the right kids, this is sure to create some true genre fans, and if I had kids this would definitely be something I’d love to show them. 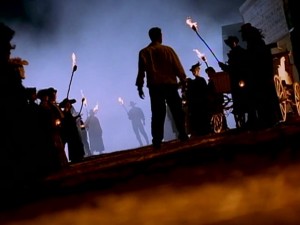 Visually, Phantom Town looks incredible. Full Moon has never been known for their adherence to visual aesthetic standards or careful filmmaking, but Phantom Town is a gloriously shot film. Well… as long as you enjoy brightly colored key lights that create stark blasts of color across the screen and the actor’s faces. It’s bold, reminding me of similar lighting on Star Trek (Original Series), and it creates stunning images throughout. The whole time I wished I could watch the film projected on a cinema-sized screen; it’s just that nice looking (for a B-Movie).

Phantom Town is aimed at older kids, and it’s chock full of pure B-Movie fun. I had a blast watching this one, and I’d definitely recommend B-Movie fans check it out now at Redbox (where it released last week under the new title: Spooky Town). They even managed to sneak in what I’m pretty sure is a reference to The Big Lebowski, and the whole thing ends with some incredible snap zooms and a killer freeze-frame that cuts to a great hair metal-esque song called No Bed of Roses (complete with a sick, wailing guitar solo) over the credits… How can I not love this movie? Phantom Town is sure to create quite a few horror/monster movie fans among the kids who see this, provided they can get it past their parents!

Next week on Full Moon Tuesday, I’ll be checking out the sure-to-be-strange film from 1985, White Slave, an Italian movie funded by Empire International!