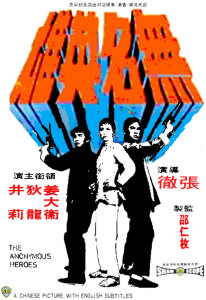 Chang Cheh has previously dealt with themes of juvenile delinquency, but this time it resonated with me more than when I saw the more obvious Dead End. Perhaps it was the “men on a mission” aspect to the story, but I found the characters and their motivations a lot easier to grasp. There’s a great moment when the brothers are playfully agreeing to the heist when Ku Feng states that he under no delusion that he will return from this mission alive. It means so much to him that even death is not a barrier. The kids, even when confronted with this harsh reality, choose to ignore it with an “It won’t happen to me” shrug and a smile. Nothing can deter them from the thrill of excitement. Even after being captured and surrounded by a garrison of troops, David Chiang still has the ability to smile and agree to decide his fate with a game of dominoes. No matter what the situation, he’s on top of the world and smiling. Youthful excitement and drive will only get you so far, though, and their unprepared bungling often threatens the entire mission. This serves two purposes: to add some light comedy to the film, and to ratchet up the tension as it looks like they are getting further and further away from completing the task before them.

The film’s comedy won’t make you laugh out loud, instead it reminded me in some ways of Steven Soderbergh’s remake of Ocean’s Eleven, where a light comedic tone is draped over the underlying feeling of tension surrounding a major criminal undertaking. It’s possible that some of the broader comedy was simply lost in translation, but as Chinese comedy tends to be very, very exaggerated, I imagine I would have been able to spot these moments. In fact, the film is much more somber and tense than I expected it to be, but even that is something of a misnomer as almost the entire film carries with it the light, carefree attitude of the protagonists. There are exceptions to this rule, but for the most part it’s a rollicking action picture.

It would be wrong to call The Anonymous Heroes a martial arts film, but it does features lots of good martial arts bits. In this film, they are merely one color on Chang Cheh’s palette, so fight fans should definitely be aware of that going in. That being said, the fights are all pretty damn fun. The first fight is probably my favorite: a playful battle where David Chiang spryly avoids Ti Lung’s fierce angry blows, thus smashing up their house in the process. I love that Chang Cheh followed up the tense relationship the two actors had in The Duel with something so light and fun. They are loving, competitive brothers, and this comedic fight is very well-done.

The finale is also quite notable for its use of guns. As the film centers around a cache of rifles, it only makes sense that rifles play some role in the final battle, but I doubt anyone could have predicted rifles being used quite like this. They are used as guns (albeit ones shot from the hip… whatever, it’s close range), melee weapons to both block and strike ala the traditional wuxia swords, and as piercing weapons via the sharp bayonets affixed to the barrels. Just on a choreography level, the finale is incredibly well-realized as the actors move deftly between using the guns in any variety of ways smoothly and flawlessly. It creates an unexpected, thrilling climax to an already pretty exciting film.

Where The Anonymous Heroes stumbles a bit is in its length. It’s not that long (only 104 minutes), but for a film with a story as basic as this, it feels longer than it should. Towards the middle it drags a bit here and there, but I can’t complain too much in a film that jumps right from the “Hey guys, do you wanna do this heist?” scene to the actual heist scene. They don’t beat around any bushes for most of the movie, so I guess that’s why some of the later fat bothered me more than it might have otherwise. But whatever, for fans of the Shaw studio and Chang Cheh this is a definite must see. It’s not a truly great film, but it’s a lot of fun and I absolutely loved it. It’s a unique film, and it proves yet again that Chang Cheh was the studio’s premiere director, always pushing himself in new directions, even while exploring similar themes.