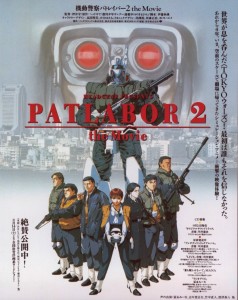 The action scenes are also smaller than in the first movie. Like before, it basically has two of them. One at the beginning and one at the end. But this time around they are shorter and less climactic. This especially robbed the ending of the satisfaction one expects from a movie. It’s still a good scene, and I did love the idea of dressing up giant robots in Kevlar vests. It’s just nowhere near enough to carry the film. 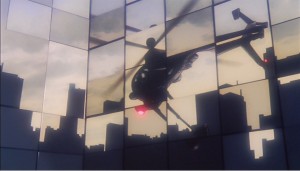 The plot follows a similar setup as the first movie, too. An opening act of terrorism sets the police force on an investigation to track down the culprit, and the rest of the film is mostly detective work. The story gets more politically involved this time, as the villain’s goal is to set the military against the civil government and forcing a confrontation between the police and the army. This actually does a good job of making the movie feel like a sequel to the first without being derivative. At the same time, all those tanks lying around the town just made me want a good fight, and I didn’t get anything good until the end.

The visuals are a definite step up, though. And considering that the first film looked great, this is quite an impressive feat. Patlabor 2 falls in that perfect time period of improved animation that didn’t rely on CG. There’s a small bit of CG here and there, but not much and it’s not used obnoxiously, so I was OK with it. What struck me the most were the detailed visuals. The backgrounds are great, the characters feel a bit less cartoonish than before, and there were some lovely reflection effects in the skyscraper windows. One brief moment had a character getting out of her car, and we see her warped reflection in the door window for just a second. It’s the kind of visual flourish that I wouldn’t expect, even from the best animation out there. 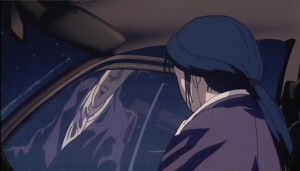 Whether you like this film or not pretty much depends on what you thought of the first film. If you liked it, then give this one a shot. If you didn’t then stay far away, because this is more of the same. If you haven’t seen the first one, then watch it instead. The two have no need to be watched in order, but the first film is more enjoyable, so why start here?

While this is somewhat outside the scope of a movie review, one other great things about this film is that it had a very good special edition DVD release that is still easy to find, and cheap. Apparently it didn’t quite sell like hotcakes. It came not only with the usual “making of” special features disc, but also with an illustrated book full of articles and commentary on the film. Then there’s the real surprise, a book containing all the storyboards, complete with dialog and Oshii’s stage directions. If you’re a fan of the film, it’s a damn fine set. Too bad I didn’t care for the movie itself so much.