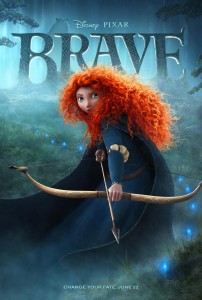 However, this is also the thing that troubled me the most and gave me a lot to think about. The early scenes are set outdoors, amongst the lush forests of Scotland, as our hero Merida is a small child longing to be an archer. The forest surrounding the characters is nearly photorealistic, and the cartoonish, stylized design of the characters seemed out of place in this pseudo-realistic environment. It felt like a reversed, modern equivalent to Who Framed Roger Rabbit? As the film continued, I either got used to the effect or there was less of a gap between the characters and the background, but what refused to die down was that little voice inside my head who continued to whittle away at the issue.

Ever since Pixar burst onto the feature film scene with Toy Story, they’ve slowly moved closer and closer to replicating reality (and achieving it) with their visuals. At the same time, CG FX have taken over the live-action side of the industry, with some major live-action films now being more computer-fabricated reality than actual filmed footage. When I saw Avatar back in 2009, I was so frustrated with it, as it felt like I was watching the world’s longest video game cutscene that I couldn’t skip. So while animation has moved closer to reality, live-action films have moved closer to animation. The lines between the two are blurring very quickly, and within a couple of years I wouldn’t be surprised if the two sides of the industry achieve visual parity.

What made the experience of watching Brave even stranger, was that the character design and their animation was reminiscent of classic Disney hand-drawn animation, specifically The Sword and the Stone. This led to me having a strange sensation of also being able to visualize what the characters would’ve looked like if Brave had been made 30 years ago. I could literally see the character’s rudimentary forms, perhaps as they looked in the film’s storyboards, performing the same actions on-screen. It’s a weird feeling to describe, and I probably sound a bit daffy, but I think it’s a unique enough experience to warrant including here.

At the end of the day, though, Brave looks great and my concerns don’t really effect the film’s ability to entertain. There are definitely slow moments and I thought the action was rather boring and drawn out, but none of that matters much as this is a no-brainer if you’re into these sorts of films. Pixar has done a lot better, but that doesn’t really matter to the kids this is designed for. Brave is an often thrilling ride, and while it failed to capture me in the way it was intended too, its visual fidelity sent me into such a vortex of cinematic thought that I have no choice but to call it a success.