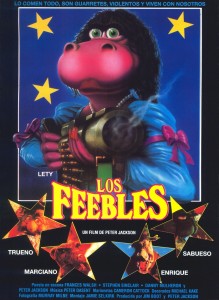 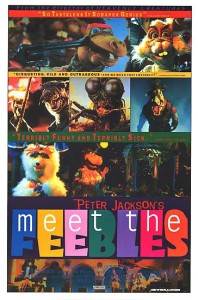 This was the second Peter Jackson movie I saw (Dead Alive was my first), and if I remember right, I saw it before he started his transition to “serious” movies with Heavenly Creatures. Which means I saw this for the first time when I was around 12. Maybe that explains a lot about my warped sense of humor. I don’t remember liking it much that first time, but I definitely loved how naughty it all was. It felt so wrong, but its raunchy nature seduced me, being the kid generally not allowed to watch horror or other seriously depraved cinema. There’s no way anyone who saw this movie upon its initial release could have imagined that Peter Jackson would ascend to the heights he has reached. 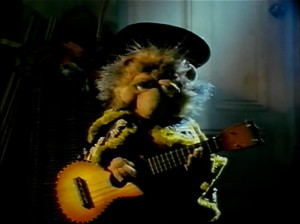 And really, think about how ambitious this movie is. Peter Jackson achieved Henson levels of puppet fantasy, but he’s not Jim Henson. He didn’t devote his life to puppeteering. At this time, Jackson was nothing more than an amateur filmmaker with one movie under his belt, which he made on four years of weekends with his workmates. And then his next movie is a full-on, no-humans puppet movie? The balls on this guy! Just the fact that this movie was completed is something of a triumph, but it’s also a hilarious black comedy, over the top and incredibly well-done. Peter Jackson is a mad genius who clearly never knew the meaning of the word “no,” instead always striving to achieve whatever insane delights his crooked mind could cook up. 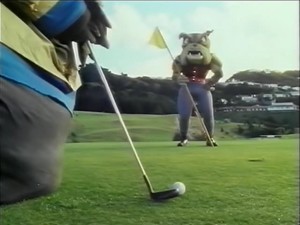 But even through all this praise, Meet the Feebles is so stuffed with insane content and non-stop, loud, grating sound, that it does become somewhat hard to keep pushing forward at points. It’s not that the individual scenes are bad, or even boring, it’s just that the human mind can only take so much at once. Between stuff like the chicken busting in on the elephant to demand the he recognize their hybrid elephant-chicken son, the new guy Robert (a porcupine) serenading his love with a Spanish guitar and a mariachi outfit, or the devious rat filming nasal sex pornos in the grimy basement, the brain starts to turn to mush at a certain point. I still love the movie, and it ends really strongly with a rousing, violent, gory finale (how many puppet films also have incredible gore?), but it is also kind of annoying in its own way. Whatever, it’s funny as hell, and it’s a movie so singular and unique that it’s hard not to be impressed with it at this point in my life.

Meet the Feebles is a film you should only watch if you’re seriously warped, twisted or fucked up. If that’s you, then you’ll likely get a lot of enjoyment out of it. I’d love to see a remastered, special edition of this film, as every copy released has been a somewhat blurry video master from the early ’90s, and it’s really starting to show its age. In the past, Peter Jackson mentioned going back and producing fully featured DVD editions of all of his films, similar to what was done for everything from The Frighteners on, but I’m still waiting!

Meet the Feebles was Peter Jackson’s second film, and it’s also his second film to feature characters going through the body of another to emerge out their anus. Too bad this didn’t continue to be Jackson’s “director’s trademark” in his Hollywood fare!