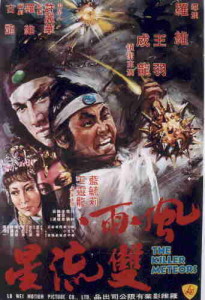 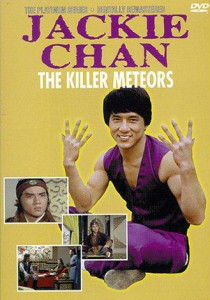 I remember watching this way back in my teenage years and not getting it at all. I didn’t know who Jimmy Wang Yu was at that point, and I couldn’t understand why Jackie wasn’t acting like Jackie. In other words: a classic case of “Early Jackie Chan movie frustration” by a young fan. But now, well-versed in classic Shaw Bros. fare and knowing what to expect from Jimmy Wang Yu and director Lo Wei, I was completely entertained by the twists and the turns of The Killer Meteors. They totally shouldn’t market this movie as a Jackie movie, though! That only ensures that most people will leave it frustrated and annoyed.

That lied-to Western audience wasn’t the only one frustrated. After the disappointing box office numbers of New Fist of Fury, Lo Wei decided that he needed to change things up if he wanted his new company to stay in business. This led him to casting the fading star Jimmy Wang Yu in his next film’s lead, and relegating Jackie to a supporting, villainous role. I imagine that Lo Wei figured he’d try Jackie as a villain to see if it worked better for him than the Bruce Lee-style character of New Fist of Fury. It’s a bit frustrating to watch these movies now, as we know what Jackie is good at, but everything happens for a reason. If these films had been successful, Lo Wei may never have allowed Jackie to be loaned out to Yuen Woo-Ping to make Snake in the Eagle’s Shadow and Drunken Master, thus depriving the world of Jackie Chan as we know him today. So while many cast aside these early films as nonsense, they’re actually more interesting and influential to his career than it would appear at first glance.

So getting back to The Killer Meteors: this movie is a lot of fun. If you like unique, inventive wuxia names then this movie has you covered. Just look at this list of supporting characters that The Killer Meteors boasts: Taoist Ghost, Black Llama, Magic Thief, Mighty God, Iron-Palm Stone Monkey, Ghost Shadow, Fong the Wind Chaser, Blazing Star, Killer Hands, Moon Breeze, Lady Phoenix. They’re so good! I love these kinds of fun Chinese fantasy names, and The Killer Meteors has what is perhaps my favorite, and most plentiful, collection of them to date.

The story does take too long to take shape and get going, but fans of Lo Wei’s previous films will find the film rich enough so that this slow start doesn’t hinder the film at all. The intro is especially fun with Magic Thief stealing an iridescent pearl, but before he can make his escape he is stopped and one-upped by three consecutive martial artists who want the pearl for themselves (Mighty God, Iron-Palm Stone Monkey and Ghost Shadow, if you were wondering). The pearl itself has no bearing on the story, but its storyline does eventually introduce Jimmy Wang Yu’s character, as well as providing a super fun, fantastical introduction.

As for the fights, they are a little sparse considering the length of the film (104 minutes), but when they do happen they’re a lot of fun. Jimmy Wang Yu is set up as an ultimate badass who’s basically invincible thanks to such a high level of martial skill and his unbeatable meteor weapon. Then the movie introduces four other badasses that stand in the way of his ultimate goal. Their eventual clashing looms heavy over the first hour of the movie, but when it actually occurs Jimmy dispatches them like the consummate badass he is set up to be, without even breaking a sweat. While this definitely robs us of a potentially dope fight, the sheer amount of quick killing power displayed by Wang Yu is extremely impressive. If you didn’t already believe that Killer Meteor was at the top of his game, this scene solidifies that fact. You might not agree, but I loved it.

As fun as the end fights are, including a battle atop poles with spiked ones underneath to add danger (similar, but much less exciting than the ’90s Donnie Yen film, Iron Monkey), the first fight with Jackie and Wang Yu is the highlight of The Killer Meteors. It captures the differences in their styles really well. Bits of it are sped up to accommodate Wang Yu’s lack of actual martial skill, and the fight seems to be edited around Wang Yu as well, so there’s lots of Jackie jumping and doing acrobatic things while Wang Yu is mostly blocking and backing up. You can also tell the choreography is much slower than Jackie is capable of, again due to Wang Yu’s limitations. But that’s OK. It is what it is, and it’s a remarkably fun and pretty exciting wuxia-themed, hand-to-hand fight.

The Killer Meteors is great fun in the tradition of early Shaw Brothers wuxia films (especially reminiscent of Lo Wei’s best work there). That being said, I’d only recommend it if you’re inclined to like classic wuxia storytelling, as the fights will sorely disappoint strict hand-to-hand kung fu fans. Jackie Chan also doesn’t really fit the film at all, but his fights should provide a hardcore Jackie fan with some enjoyment if they decide to venture this deep into his catalog. The Killer Meteors is pretty much all entertainment for me, though. It’s not fight-based entertainment, but if you’re willing to open your mind a bit, The Killer Meteors will treat you right.

Next up in this chronological journey through the films of Jackie Chan: 1976’s Shaolin Wooden Men! I’m quite excited to revisit this one, as I remember it being one of the better early Jackie films. We’ll see! If nothing else, I still love the title to death!