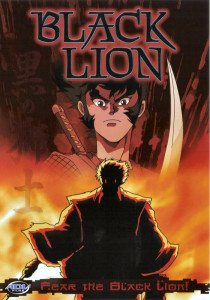 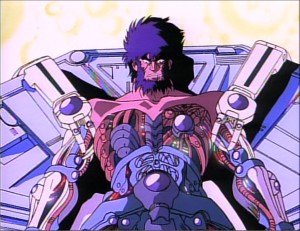 The story soon shifts gears, though, showing one of Oda’s soldiers, the seemingly immortal swordsman Ginnai, as he massacres a group of ninjas. A ninja named Shishimaru is the sole survivor of the fight. He is rescued by a rival group of ninjas that also want to kill Ginnai, and while Shishimaru doesn’t exactly like the other guys, they wind up working together to assassinate Ginnai.

There really isn’t any more to tell. The rest of the film centers on series of assassination attempts on the unkillable cyborg. The film is almost nonstop ninja action, and it’s pure gold. There’s tons of sneakiness mixed with fierce sword fights. The ninjas drop all kinds of punishment on this guy, and like the Terminator, he just keeps coming. My favorite of part is when Shishimaru ambushes him with a bunch of scarecrows in a cloud of smoke. It’s a great trick followed by an equally great sword fight where the two bounce across the landscape faster than the eye can see. 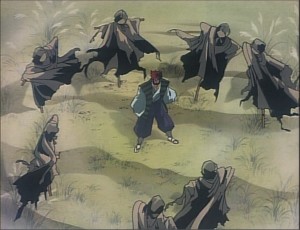 I could go on about the various scenes and how thoroughly entertaining they are, but in a film where the only plot is more action, it would be nothing more than a spoiler. I’ll just say that the final showdown features some of the most unexpected moves from Ginnai, and all of them left me busting a gut. It’s a brilliant end to a great battle. The only weakness here is the somewhat lackluster animation. It’s by no means bad, and it conveys everything it needs to, but I’ve seen better.

Of course if you need a gripping story, you’ll need to look elsewhere. The closest thing to an explanation is a few lines of dialogue that mention Oda distorting the timeline, which implies some kind of time travel. That’s it though. All the out-of-place technology is otherwise left a complete mystery. That sure doesn’t bug me though. I wanted a kick-ass action film, and that’s exactly what I got. I’m not going to complain about a little mystery along the way.

My biggest problem with the film is that it ends. It’s clearly just a small part of a much larger story. After the opening invasion, Oda’s army is forgotten and the rest of the story focuses on taking out just one of his soldiers. There’s still an entire army of laser-wielding cyborgs that need to be stopped. Considering how much pure undiluted fun this film was, I have no idea why it never got a sequel. Nonetheless, I am happy to get what I did, as this has been one of the most entertaining anime titles I have seen in a long time.