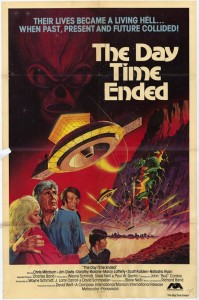 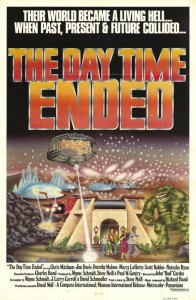 The film opens as a family returns home to stay with their grandparents in their new, state-of-the-art, solar-powered desert house. The gruff but kind grandpa gives his grandkids, Jenny and Steve, a pair of horses as a welcome present and perhaps as a distraction for the incredible boredom that will set in from living in the middle of the hot, windy California desert. I should know, I grew up about 10 miles from where this was shot. While walking around the corral with her pony, Jenny finds a glowing, green, pyramid-thing. Of course, the first thing she does is touch it. Nearly every genre film has this moment, where a character could potentially choose differently and send the film’s flow chart along an entirely different course towards the boring, mundane (but quirky, always quirky!) slices of life that many independent films are. But here Jenny chooses wisely and touches the pyramid, starting us down the path to B-Movie thrills as she starts to glow white along with her nearby pony.

Meanwhile, the rest of the family discovers that someone has broken into their house and messed everything up! The house is in shambles! Oh nos! This is the point where the other kid, Steve, proves that he’s not just there for looks. He offers up a suggestion as to who might have done this crime, and it garnered the biggest laugh I’ve had at a movie in years. He says, “Looks like some bikers did it.” My mind spiraled into visions of bikers running wildly through the house, upending recliners, taking the phone off the hook and carefully giving that painting of running horses on the wall a distinctly cockeyed angle. Y’know what, Steve? It does look like bikers did it, and I’m glad you were here to point that out.

So before I make this whole review a plot summary, I should move on to something else. Maybe it’s just that low-budget FX of the late ’70s were still awesomely realized practical FX and are therefore inherently more impressive than current low-budget FX, or maybe it’s just my incredible affinity for stop-motion and Close Encounters-esque spaceships flying around the night sky, but I thought the FX were wonderful. They’d be even better if someone would remaster this movie and re-release it in widescreen! Full Moon? Shout Factory? Criterion? I’ll take what I can get. Even in its current full-frame DVD, the FX are impressive and very fun. 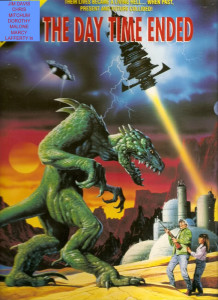 The stop-motion FX are once again courtesy of Dave Allen, old school Full Moon’s resident stop-motion badass. At this time, he had previously worked on Laserblast for Charles Band, but the stop-motion in that film was rather limited and merely a supporting aspect to the production (but still super awesome). Here the stop-motion is still more supporting than anything else, but it captures a pair of giant, hulking beasts in a desperate struggle for survival. It’s a fantastic scene and the highlight of the film. I wish there were more FX, but it’s still incredibly impressive just how much awesome stop-motion (and other FX) they crammed into this movie on such a limited budget.

The narrative is rather spotty, though, asking the sound design department to take over and run the show for minutes at a time. The scenes leading up to the finale are mostly without dialogue, allowing you to marvel at the visual FX and the plot jumps that are impressive in how boldly convenient they are. I didn’t mind one bit, as the whole thing is just F-U-N, but others will definitely take issue with it. One of my favorite bits of WTF was when Grandpa wanders around a ship graveyard (visually reminiscent of a similar desert scene in Close Encounters of the Third Kind), and barely makes it back to the house, which is covered in shimmering lights. He then tells everyone left in the house that they’re in a time warp. They never explain why or how he knows they’re in a time warp (or even what a time warp is), but here’s what I think. Imagine you’re a little kid watching this. You’re not going to question this moment because, “Grandpas know stuff.” It’s only adults that will question this moment and see it as a failing on the part of the screenwriters. Besides, WE (the audience) know they’re in a time warp (even if we didn’t have a name on it), so Gramps’s confirmation is merely affirming our beliefs.

The Day Time Ended was a great piece of campy, low-budget science fiction and I enjoyed every bit of it. It’s definitely one for the fans, as I can see a lot of people picking it apart and ruining the fun that’s built into the film. I can also imagine this being remade as something really thrilling, and if they continue plumbing the depths of ’70s and ’80s movies we might not be too far from that in a few years! We can only hope. The Day Time Ended is not one to think about, it’s one to enjoy… and I loved it.

Not a trailer, but it’s the best I could find.

Next week on Full Moon Tuesday, I’ll be preparing myself for the upcoming release of Full Moon’s latest film, Ooga Booga, by watching 2005’s Doll Graveyard, the film where Ooga Booga made his first appearance!