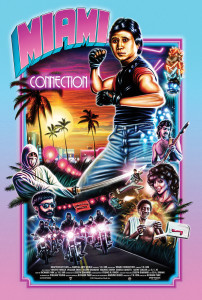 “We could write another Tae Kwon Do song, and after Tom does one of his guitar solos we could all break boards.”

I’m tempted to leave this review at just that quote, because your enjoyment of Miami Connection can all be boiled down to your enjoyment of that quote. It perfectly encapsulates the street martial arts/musical film that Miami Connection is, and for those that love ’80s action it is one of the best treats ever unearthed from obscurity. It’s actually so good, inspiring such amazing thoughts of love and praise, that I’m nearly paralyzed to discuss it rationally. I’ll do my best, though. 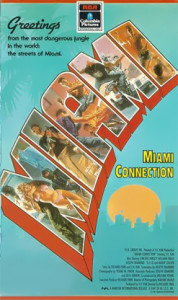 Miami Connection is a movie we all should have seen in our childhoods, but hundreds of shortsighted film distributors in the ’80s refused to pick up the film for wide release. The story of its re-release is one of pure luck, as a programmer for the Alamo Drafthouse in Austin was apparently trolling through eBay listings when he came across an ’80s movie he’d never heard of. He blind-bought the film, and upon viewing it saw that it was something special. Imagine if someone else had sniped the auction! The world at large would’ve been robbed of the joy that this movie provides.

The screen story of Miami Connection is pure bonkers — just the way an ’80s action movie should be — providing its stars a perfect framework to rock out and kick ass. A group of motorcycle ninjas control the drug trade in Miami, and the only thing stopping them from taking over nearby Orlando is the Tae Kwon Do pop rock band Dragon Sound. The two factions butt heads repeatedly throughout the film, but it’s not all about the fights. Miami Connection is also a film of empowerment and friendship, as the members of Dragon Sound are all orphans who live together like a patchwork family. They are friends through eternity, loyalty and honesty, sticking together through thick or thin.

As a film, Miami Connection suffers from many things that just about every other low-budget film does. From poor, first-time acting, to bad writing, the film is a treasure trove of questionable filmmaking. But these factors should never be a deal breaker, as they lend Miami Connection a charming, homegrown quality that is quite endearing. Besides, the sheer overwhelming power of its positive traits far outweigh whatever issues the film has, and to even bring up these “problems” while discussing a film featuring a song titled “Tae Kwon Do Family” is just ludicrous. Miami Connection is fun of the purest and highest order, just like the stupid cocaine the ninjas deal in the film.

Where Miami Connection legitimately shines is in its martial arts sequences, of which there are many. There have been tons of Karate vs. Kung Fu movies, but has there ever been a Tae Kwon Do vs. Ninja movie? If this is anything to go by, there should be more… lots more! Each fight is seemingly better than the last, with the best coming at the finale of the film amidst the Miami jungle. In addition to thrilling Tae Kwon Do action, there’s also a heartfelt moment that jeopardizes the outcome of an especially touching sub-plot, and I was nearly in tears from it. No shit. My eyes welled up and I wanted to shout, “NO!!!” I’m probably one of the few to actually have an emotional response to this moment, but it is designed for that, and at least for me it worked completely as intended.

The reason these martial arts sequences are so much fun is that the performers are legitimate Tae Kwon Do experts. Y.K. Kim (AKA Grandmaster Kim) is our lead and the film’s fight choreographer, and the rest of the cast is mostly made up of his students from his Tae Kwon Do studio in Orlando. Kim is truly awesome to watch. His years of training look incredible on-screen and he handles everything from jump kicks to wielding an enemy’s samurai sword with ease. Around the middle of the film, one of his training sessions is showcased, allowing the audience to see without the danger of a real encounter Kim’s sharp, precise form and his ability to thwart attackers with and without weapons. When these techniques later help Kim take down the ninjas in the jungle, Miami Connection transitions from a film built simply for fun to an educational film about the effectiveness of learning self-defense techniques and preparing yourself for all circumstances.

Visually the film is very reminiscent of action films from the Cannon studio, while also exhibiting acting and writing that feels more at home in a shot-on-video amateur film. Miami Connection is the sole credit for most of the actors, and a cynic would say that it’s easy to see why. But personally, I wish Y.K. Kim and the boys of Dragon Sound had made a whole series of films, taking on any number of crooks and thugs and defeating them with their strong Tae Kwon Do skills and their unbreakable friendship. If nothing else, Y.K. Kim could have easily carried a solo martial arts film on his skill alone.

Miami Connection is a film that will satisfy a select group of people extremely well, while leaving the rest of the public scratching their heads as to why anyone would enjoy it. I loved Miami Connection from start to finish and I highly recommend it. This is B-Movie gold, right here.