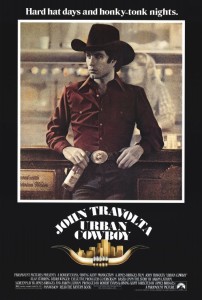 But again, before you write off Urban Cowboy as a simple bar love story (which is kind of is), it’s also a really well-written and structured examination of pride and the effect it can have on life. When Bud is the new guy in town, he quickly becomes well-known at Gilley’s with his sharp-looking duds and his even sharper good looks. He’s becomes the top dog at Gilley’s quickly, attracting the most beautiful girl and hitting the arcade punching machine harder than anyone else. This leads him to a false sense of dominance, at one point even stopping and purposefully out-dancing a guy tearing up the dance floor by himself. They never show the other man’s frustration with this, and perhaps it was more good-natured than I took it as, but I found Travolta extremely cocky and self-assured during this period of the film.

This all changes when Scott Glenn’s character is introduced. Bud and Sissy take a trip to the convict’s rodeo and Bud waxes poetic about how much he enjoys and respects the convict bull-riders because they don’t have anything to lose. He boasts and talks from afar about how impressive they are, but it’s a different story when the best of these convict riders is released and shows up at Gilley’s bar. For once, Bud is not the top dog, and he doesn’t quite know what to do with that. Confronted with a “real cowboy,” Bud is quickly revealed as the urban cowboy he is, and his wall of over-confidence is quickly broken.

The performances are gripping and laced with deep emotions just under the surface (especially on Travolta’s part), and it makes for great relationship cinema. We can also draw a few comparisons in Bud and Sissy’s relationship to our previous film About Last Night. Both films depict young people enamored with the idea of love, but not yet really understanding what that truly entails. Bud and Sissy are very much “two kids playing house” like Demi and Rob Lowe in About Last Night, but here it feels a lot more realistic and believable. The similar themes between films reinforces the idea that “playing house” — or to broaden it out a bit: immaturely acting out what you think a relationship should be based on the actions of your parents (like Prince in Purple Rain) — are universal human struggles that many of us deal with throughout our lives.

I unconditionally loved everything about Urban Cowboy, but I must single out two specific scenes as my favorites. The first is when Bud and Sissy dance for the first time. The camera circles around the dance floor as they do the iconic Texas Two Step, weaving in and out of other dancers. It’s a much sweeter moment than the pelvic gyrations of Perfect‘s sexually fierce aerobics, but it carries a lot of the same sexual tension and passion. Eventually the dance gives way to deep, sensuous kisses and this moment is arguably the most charming and romantic moment in all four of the films we’ve covered for Valentine’s Day.

The second scene I want to single out is also packed chock full of sexual energy, but the tone is on the complete other end of the spectrum. After things have gone a little wrong for Bud and Sissy, Bud finds himself on the sidelines of Gilley’s mechanical bull as Sissy slides on. She knows he’s watching her, so she lays down backwards on the bull’s back to kiss her new beau, before seductively sitting up and delivering cinema’s greatest “make your man jealous by riding a mechanical bull” scene. You’d have to be stone cold dead not to be moved by this scene, if not by the intensely erotic, sexual motions of the beautiful Debra Winger, then by the sexual frustration and jealousy of Travolta.

The soundtrack is an incredible grouping of excellent late ’70s and early ’80s country cuts, perfectly capturing the country pop movement that eventually took over the genre completely. But this was when country pop was great and still genuine, before every singer sounded the same and the songs were about stupid shit like achy, breaky hearts and sexy tractors. You can’t go wrong with live performances from Bonnie Raitt and Charlie Daniels, and Urban Cowboy has those and more. There are definite perks to setting a film in a bar with live music!

But having said all that, your mileage may vary with this movie. I absolutely loved it and I think it’s perfect as is, but there is something of a nostalgic bent to my viewing of the film. While this was the first time I’ve seen Urban Cowboy, my dad was once a struggling country bandleader during these boom times for country, so I was raised on this honky-tonk bar music and I have an incredible affinity for it. That alone made me incredibly nostalgic about my childhood, but it was taken to the next level when I noticed that John Travolta had an almost identical cassette tape machine to the one my dad gave me when I was a kid. Travolta’s had black speakers, and mine were silver, but other than that the two machines are nearly the same. It might sound odd to be so nostalgic about a tape machine, but I loved that damn thing. It was on that machine that I discovered the world that is music, so it definitely holds a special place in my heart.

On top of all that, I found the mechanical bull riding in the film to be incredibly interesting to watch. There’s a lot of it, and I can imagine some feeling like it’s far too much, but I was glued to the screen whenever someone would mount that steel bovine. The rider’s movements looked somehow faked, as if they were computer models. “The human spine doesn’t really move like that, does it?” I thought. It was nuts how engaged I was by the bull riding, but I’m sure a lot of it was due to the incredible cinematography. The smoky, wood interior of the country bar is captured perfectly, and there isn’t a bad shot in the movie. It’s perfect.

So if you’ve ever looked at this movie and thought, “Psssh, I’m not watching that stupid mechanical bull movie,” you totally should! I thought that exact thing many times before, but Urban Cowboy absolutely blew me away. And even if you can’t get into the country music, the Texas Two Step or the mechanical bull-riding, Urban Cowboy features some of the best little cowgirl outfits I’ve seen in a film. What’s not to like about this movie?