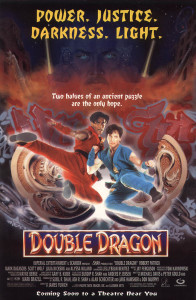 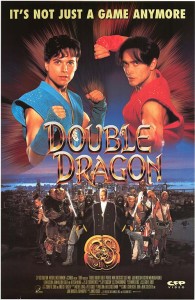 Thousands of years ago in ancient China, an evil army of shadow warriors terrorized the great city of Changsha. To save his people, the good king sacrificed himself to create a mystical medallion. Realizing the ultimate powers of the medallion, the king split it in half. To one son he gave the power over body. To the other, power over the soul. This is the legend of the Double Dragon.

New Angeles 2007
After the big quake

The king knew that together his sons would emerge triumphant and return peace to the land. After their victory, the princes hid the medallions to prevent them from ever being used… for evil.

Long story short, the villain has acquired one half of the medallion, while Billy and Jimmy Lee’s adoptive mother Satori has the other half. I’m sure you can figure it out from there. The key things to get out of that opening monologue are that: A. sci-fi elements will be a factor, and B. that this is “New Angeles,” a version of Los Angeles where gangs rule the streets and the oceans have overtaken a good portion of the city. This lawless metropolis comes in handy when you’re adapting an NES game that features relentless waves of bat-, knife-, and whip-wielding thugs, but damn do they miss a lot of good opportunities.

But Will, you say, this is Double Dragon the movie! It’s not only a video game adaptation, it’s an adaptation of a fighting game where the whole story was a girl getting punched in the stomach! It’s not worth the time to point out flaws, just have a good time!

I tried, I really did. Through the first 20 or so minutes, I was completely on-board. They might call it 2007, but this is a ’90s future through and through. They tried their best to replicate a lot of what made the TMNT movies fun, things like a skateboard/teenage rebellion culture, neon colors and juvenile comedy. Unfortunately, I am no longer eight years old. I’m convinced that if I had seen this film then I would be in love, but instead it came out when I was 13 and I had enough sense to stay away from the film then, even if I was absolutely obsessed with the original NES game (and at some level, always will be). 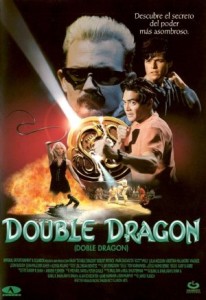 But I’m painting it a little too harsh I think, so I’ll try to focus on the positives from here on out. First and foremost, Mark Dacascos is awesome. He really deserves to be in a better movie than this. His martial ability is the real deal, and he’s a good-enough actor to hold down a legitimate martial arts movie of his own. Too bad this isn’t a martial arts movie, it’s a children’s fantasy with some light, Jackie Chan-inspired combat. Regardless, Dacascos does a great job with everything he’s given, and this reminds me that I still need to check out Drive, a ’90s film he leads that is supposedly one of the only American films to ever come close to delivering HK-quality fights. With Dacascos in the lead, I can believe it; the dude is definitely no joke. Party of Five‘s Scott Wolf, on the other hand, not so much.

There are also a few scenes featuring your favorite action henchman and mine, Al Leong. He even gets to staff fight with Dacascos, in what is probably the film’s best choreographed fight scene, not counting the super fun tournament introduction for our two brothers. There’s also Alyssa Milano in a key supporting role, and I wonder if she ever dreamed she’d be feeding a mutant Abobo liquid spinach through a funnel while she honed her acting chops as a child alongside Tony Danza in Who’s the Boss?. Somehow I think not, but curiously this is the not the biggest case of slumming it seen in Double Dragon. No, that distinction is reserved for Robert Patrick. Only three years after turning in a phenomenal performance as the T-1000 in Terminator 2, Patrick was on the set of Double Dragon sporting a ridiculous blonde flattop reminiscent of a certain destructive god from Tobin’s Spirit Guide. I’m sure he wondered multiple times where things went so wrong. 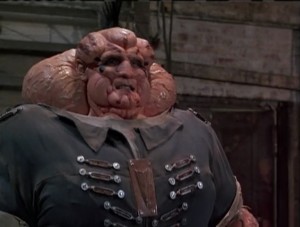 For as much as the plot doesn’t remotely resemble the game’s, the art style does remind me of the game in broad strokes. I can’t put my finger on it specifically, but the bright color palette and the never-ending stream of gang members were enough to at least give the feeling that they tried to incorporate something of the game. And early-on there is a shot of the gang members outside of a vertically rolling garage door, which pretty much fulfills every expectation I had for the film. The female whip-warrior also makes the transition pretty well, but Abobo, easily my favorite villain of the game, gets very little love. First he arrives as a mohawked, meathead gang member, and then later he’s pumped full of chemicals and transformed into a gigantic mutant that wouldn’t be out of place in Story of Ricky. But here it’s dumb, and unfortunately no one punches through Abobo’s anything in this movie, as Double Dragon is a very safe PG-13.

Double Dragon is an interesting movie, if only to see Universal put a fair amount of money into a film only to have it come out looking and sounding a little closer to a Full Moon movie than they were probably comfortable with. The whole film has something of a Power Rangers vibe to it, although for that allusion to make sense you have to imagine a film composed solely of  the opening teenager scenes in Power Rangers, without all the fun bits. And in a weird way, the story reminds me of all those “everyone’s after the awesome sword” wuxia movies, and taken as such it’s a little easier to swallow the nonsensical storytelling. But unless you harbor a love for this film because you saw it in your youth, I don’t really see anyone extending Double Dragon the love necessary to enjoy it. Even when it features the perennial favorite action sequence of the ’80s and ’90s: the powerboat vs. jet ski struggle (here through the flooded wasteland that was Hollywood Blvd), Double Dragon is just too shitty to be worth your time.

Futures Passed finally reaches 2013 tomorrow, with a look at what the year ahead might be like if we all romanticized the Civil War. Any guesses?