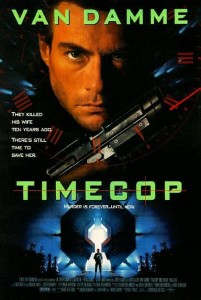 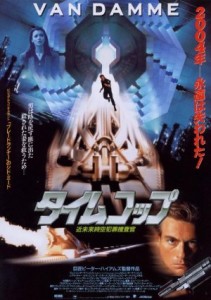 Watching Timecop this go-round was a hoot. It’s not a film with enough thrills to be truly outstanding, nor is it trashy enough to be incredibly memorable, but Timecop is an extremely underrated JCVD film. And when I say that I’m talking purely in terms of action and how awesome JCVD looks and fights. Fuck everything else, this is a JCVD movie. If you want to hash out plot specifics and reasons why some moment in the 1994 timeline negates something later in the film during the 2004 section, I’m sure there are plenty of suitable websites for that kind of discourse. Silver Emulsion is pure JCVD fanboy land, though, and I honestly care more about the hows and the whys of where the splits make an appearance than if Plot Point A doesn’t perfectly line up with Plot Point B. Does that make me a flawed reviewer? Perhaps, but I didn’t get into this racket to rip JCVD a new one, I got into it (among other reasons) to defend films that unnecessarily get a bad rap, and something like Timecop is exactly that.

Timecop opens spectacularly in 1863, as a lone man holds up a Confederate gold delivery. You might think you started watching the wrong film, but then the robber opens his jacket and busts out two future-uzis to blast away the men before him. This eventually leads us to international superstar and martial arts sensation JCVD playing a timecop in the far-off year of 2004, 10 years after the introduction of time travel to the world. You might not remember the brains cracking that scientific holy grail, but that’s because the suits in Washington kept it behind closed doors and under the watchful eyes of JCVD and Bruce McGill.

Now say what you will about the plot and the questionable time travel logic, Timecop‘s story is actually still quite relevant in today’s world. The main drive of the story centers around an impending election and one of the candidates doing whatever he can to raise funds. He realizes that America has become a TV culture, and that the guy with his face out there the most will probably win the election. If only he’d waited a few years, corporations wouldn’t have had any restrictions on the amounts they could donate to his circuitous campaign. Although it didn’t work out for Mitt Romney, so theoretically it wouldn’t have worked for this devious asshole either. And I’m sorry, but when American politics start resembling the plot of a JCVD movie, the country’s in trouble (as if that wasn’t already apparent).

I really enjoyed the light futuristic elements they added during the 2004 scenes. It really just boils down to the cars, the time travel equipment and the guns, but these small elements work perfectly to let us know it’s the near future. I do think the cars are way too futuristic looking to be plausible vehicles of 2004, but my love of high-concept future cars overrides any sort of logic in this situation. The digital FX are also extremely rudimentary, but they actually added to the charm of the film. I’m sure they were a source of disappointment to 13-year-old me, but now I can really appreciate the wonderful finale that resembled something of a cross between the tentacle in Day of the Tentacle and the puzzle animations from The 7th Guest.

I also can’t let this review end without mentioning how much I enjoyed JCVD’s acting. I’ve never understood why he gets such a bad rap as an actor, and watching Timecop proved to me that it’s just people’s prejudice against action and/or martial arts stars, and not a reflection on his actual skill. JCVD simply owns the movie, playing two versions of himself (a loose, happy-go-lucky 1994 version, and a toughened, more disillusioned 2004 version), and performing some really outstanding splits. That’s pretty much all I’m asking for in a JCVD movie, and Timecop features a lot more entertainment on top of those requisite elements.

If you’re a fan of ’90s action or a JCVD fan (and why wouldn’t you be?), then I highly recommend you give Timecop another shot. It’s fun, and while its plot is a little convoluted, I give them high marks for attempting such a twisting time narrative in a JCVD movie. You have to fill in some of the gaps yourself, but that’s part of the fun of Timecop. Sit back and watch the explosive, time-traveling fun and forget everything else. And if nothing else, the film hammers home one incredibly important mantra should time travel ever become possible and readily available: “The same matter can’t occupy the same space.” Remember it, just in case.

Futures Passed continues tomorrow with a film documenting the year 2005, and what was going on high, high above us in space. Any guesses?