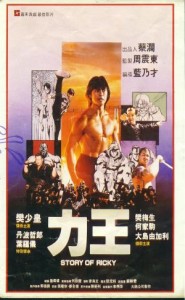 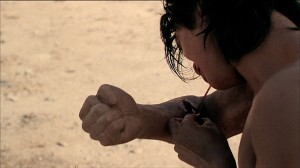 It’s somewhat ironic that in a film called Story of Ricky, the story would be the thing taking a backseat. It’s never about the story in Story of Ricky, although there are flashbacks to fill you in on Ricky’s past, as well as a great progression that’s always occurring during the prison scenes. The film never stagnates; it is always moving forward into the next gory extravaganza. It feels like there could be a lot more story, but I honestly don’t see that as a flaw. It’s much better this way instead of sitting through an extra 15 minutes of character building when all you want is fun gore. I’ve heard this called a bad movie based on its lack of story, but in a film that was obviously going for something completely different, I don’t think that’s a valid criticism. Just because a film uses incredibly grotesque and disgusting gore to move its plot along, instead of the usual dramatic tension, doesn’t make it any less well-made; it’s just different.

The one thing that really stuck out to me this time was how much it felt like a live-action anime film. I dig some digging and very quickly realized why: Story of Ricky is an adaptation of the manga Riki-Oh. It’s always interesting to see one culture’s take on another’s art, and Story of Ricky is a match made in heaven. The ability of HK filmmakers to take fantasy and martial arts in directions previously unimagined, coupled with the wildly inventive, violent tendencies of the Japanese, creates a film so unique and memorable that it will go down in history as one of the most over-the-top gorefests of all time. There were also two OVA based on the manga, produced prior to this film, but I have a hard time imagining even animation coming close to the level of over-the-top hilarity that this film manages. Story of Ricky is a seriously impressive work, and the gore is absolutely top-notch stuff. 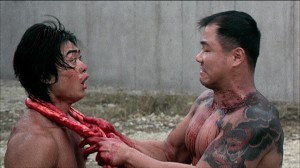 This was Lam Nai-Choi’s second-to-last film, and without knowing his story (and making some assumptions), I have to imagine that after finishing Story of Ricky, he felt his life’s work was complete. After making a gory martial arts film as perfect as this, what’s the point in trying to recapture that magic again? While I’m sad that he didn’t make a shitload of movies like most Chinese filmmakers, he does have a broad legacy of science fiction and fantasy work that I’ll have to crack into one of these days. He started his career as a cinematographer for the Shaw Brothers, working almost exclusively with the illustrious director Sun Chung on such genre greats as The Avenging Eagle and The Deadly Breaking Sword, before eventually getting his chance to direct himself.

I should also mention the star of the show: Fan Siu-Wong. He’s the son of notable Shaw player Fan Mei-Sheng (who also plays the one-eyed assistant warden here). Siu-Wong’s on-screen charisma is immense, and he plays the role of Ricky with a palpable glee. The fights in the film are never lengthy because of Ricky’s super strength, and they betray the actor’s martial skill. He’s actually really competent, but you’d never know it from the fights here because this isn’t a choreography film, it’s an FX film. He’s great in Ip Man, though, so if you want to see him strut his stuff without punching through everything, that’s a great place to start. But honestly, I haven’t seen too much else that he’s been in, so perhaps I’m not the best source of information regarding him. In any case, I feel he could have been a huge star, based on his soft, boyish face and his martial prowess, but it seems that he’s been mostly relegated to second-tier roles in the years following Story of Ricky. Maybe he’ll be the next Donnie Yen, eventually taking up the mantle of the HK greats after paying his dues for years. I would totally welcome that. 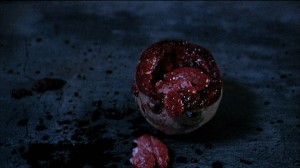 I don’t want to go into too much detail in regards to the gore, because that would spoil the fun for those that haven’t seen the film. You really should just go and watch it. But in the interest of providing something worthwhile to read, let me relate one of my favorite moments during an early fight. Ricky is up against one of the prison’s Gang of Four, a group of super-prisoners in league with the corrupt warden. The guy wields a knife and is proving to be a rather formidable opponent. He slices with precision into Ricky’s forearm, severing the tendons and thus rendering that arm useless. But Ricky is not to be stopped. During a short lull in the fight, Ricky digs into his arm, retrieving the two ends of the severed tendon and retying them together. AHHHHHHHHHHHH! It’s almost too much awesome for my brain to comprehend. And then, only a few seconds later, the villain slits his own stomach open and tries to strangle Ricky with his intestines. Again, it’s hilarious and almost too much awesome to handle all at once. I love this movie.

In a film populated almost exclusively with inventive, fun characters, my favorite is definitely Fan Mei-Sheng’s assistant warden. He not only has one eye, he also has a hook claw for a hand, and he stores his breath mints inside of his glass eye. You’ve never lived until you’ve seen a man eat mints out of his own eye, or drink the water his glass eye’s been soaking in. And then there’s his office featuring every available bit of shelf space crammed full of big-box VHS porno tapes. They never mention it, or make any sort of obvious shot of them, but this is one of my favorite comedic touches in a film full of them.

Story of Ricky is an incredible piece of work, and the perfect film to feature at a midnight screening or at home with your best buds. Hilarious, disgusting, and extremely entertaining, Story of Ricky is quite possibly one of the most enjoyable movies I’ve ever seen. Watch it, y’all.

Futures Passed continues tomorrow with a look into a 2004 where time travel is a reality. Any guesses?