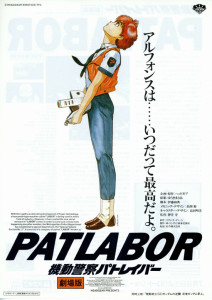 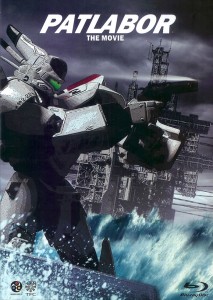 The idea of giant robots running around town gives an implication of a very action-oriented story, but it’s actually not. There are some great action sequences, which are gorgeously animated, that open and close the film, but mostly it is a police procedural. They just happen to be police officers that drive giant robots instead of cars. Going into this film with an expectation of having a ton of giant robots kicking ass will only leave you disappointed. They spend almost the entire middle section tracking down clues and figuring things out, but neither is the film a mystery. The villain is known right from the start, and in fact, he commits suicide at the beginning of the film. They aren’t trying to catch and punish him; they’re trying to stop his insane plan from taking effect.

Thousands of labors are now in use as construction vehicles around Tokyo, and a new operating system that is far faster and more efficient has just been released, decreasing construction time drastically. Naturally, everyone is installing the new OS on their labors since it’s so much better, but it was programmed by that crazy dude, and he slipped in a few hidden programs that occasionally cause the labors to go berserk. And with the programmer dead, the police have to figure out for themselves why the labors are going nuts and how to stop them.

I was a little disappointed in the villain’s big master plan, which felt rather far-fetched to me, but then what’s the point of a sci-fi adventure if not to be a bit far-fetched. Anyway, by then they were leading into the fun part of blowing up a tower and fighting off a horde of rampaging robots, so I was able to forgive it. Up until then, the detective footwork was able to keep me interested as they tackle the problem from different angles.

Mamoru Oshii displays some excellent visual style here. It reminds me in some ways of his live-action films, Red Spectacles, and Stray Dog. But thankfully, it has neither the sheer confusion of the former or the sheer boredom of the latter. The intricacies of the plot combine with the dramatic visuals to make things watchable despite essentially being a long conversation. I do wish there had been something to liven up the investigations, but it did manage to keep me from drifting off at least. 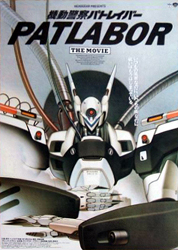 One of the most surprising aspects of the film is its focus on computers. I’m sure there are plenty of people today that won’t understand what they’re talking about when they explain that the program has installed itself into the SRAM and perpetually rewrites the operating system as it gets deleted. I can only imagine how well people watching this 20 years ago would have fared. I was amazed at how focused it is on the computer technology and how well it represented infectious malware years before the word even existed and public awareness of such things was limited. The plot works as well today as did back in the ’80s. Maybe even better. After seeing this, it is no surprise that Mamoru Oshii would later go on to direct Ghost in the Shell, which also deals with futuristic technologies, and has very similar themes in some places.

Where the film left me unimpressed, however, was the comedy. The characters are constantly expressing exaggerated emotions and distorted facial expressions. It felt much like slapstick comedy at times, and it clashed with the more serious focus of the plot. I’ve seen anime juggle humor and drama very well, but this time it didn’t work out for me. I’ve read that the Patlabor movies are far darker than the series, but this film isn’t very dark at all, so the TV series would have to be rainbow-colored candy bright if that comparison is true. Or maybe I’m just messed up in the head and have too high expectations for something described as “dark.”

All in all, Patlabor balances out to be pretty good. While the lack of solid action through the majority of the film will turn away a large number of viewers who wanted giant robots smashing things up, there is still a good story if you open your eyes and pay attention to it. Even though it has some flaws, it has a lot going for it, and discerning anime fans should check it out for its intellectual plot bookended by some cool sci-fi action.

Futures Passed continues tomorrow with a bloodthirsty look at the year 2000. Any guesses?