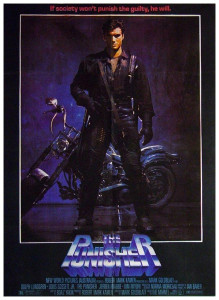 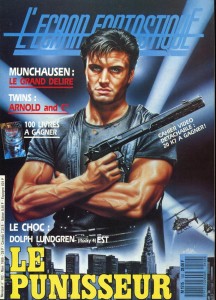 Very true to the nature of most comic books, the plotting and scripting of The Punisher are action-focused and not very deep. Nowadays comic books movies are all the rage and the filmmakers love to play up the epic, emotional side of comics. This works really well for lots of movies, but comics are not all created equal. Many books are not much more than threadbare lines of plot that simply bridge one cool action scene with another. In this way, The Punisher is one of the truest and most faithful adaptations of the comic medium to ever grace the screen. It’s one that plays quickly and excites, just like the fun, page-turning comics of my youth. For every Dark Knight Returns and Watchmen there are hundreds of simple, action-focused books, and while this Punisher might not have a skull on his chest, the violent essence of the character remains and is realized extremely well.

But enough big words about story structure and adaptation, what about the action? It’s fun. Absolutely nothing but fun. Violent, over-the-top, explosive, leather-clad fun. Is it necessary to rappel through a rooftop window into a casino, carrying a belt-fed machine gun and spending the next minute or so doing nothing but slamming hundreds of bullets into slot machines and intermittently blasting off grenades to blow up poker tables? Well, yes, of course it is, and while some might cite it as excessive and unbelievable, the excess and unbelievability are where the fun lies. A lot of people blame violence in the media as negatively affecting children, but wild scenes like this are a great example why seeing this kind of stuff as a kid did not make me respond with violence of my own. It’s so exaggerated that it’s obviously not real life, and is therefore nothing but imaginative escape divorced from reality.

Oh, but don’t think that I’m done talking about the action. There’s so much in The Punisher that one measly paragraph featuring a lengthy digression cannot handle its relentless power. Explosions? Check. Hurtling knives? Check. Grappling hooks shot through a baddie’s torso and then zip-lined from while machine-gunning the other bad guys one-handed? You bet your fucking ass! I was never the biggest Punisher fan, but my favorite issues of his were always The Punisher Armory. And like The Punisher Armory, The Punisher revels in his arsenal, allowing you to marvel at his many weapons and his mastery of them all.

And still, two paragraphs later, I haven’t even touched on the phenomenal, action tour-de-force finale. The Punisher assaults his enemy’s lair, with timed explosives taking out the lights and elevators in key intervals. When the lights go down, generator-driven red light bathes the screen and we’re treated to an extended sequence of kick-ass action. Samurai attack from every angle, super-kickers kick for their lives and Dolph takes it all on without batting an eye. He is perfect as the Punisher, both in look and action. I’ve never seen the more recent Punisher films, but I can’t imagine they come close to delivering the non-stop fun of Mark Goldblatt’s action powerhouse.

I won’t bore you this time around with lots of words about the camera and how technically impressive the film was or wasn’t. Those things don’t matter so much in a film like this, but I will say that it’s pretty well-filmed. The sewer lair scenes are especially impressive, with the camera winding its way through the corridors and eventually finding a nude Lundgren meditating amongst his instruments of destruction, and, among other things, an awesome looking anvil. Goldblatt may not be a household name, but for one man to deliver both Dead Heat and this film, I wish he had directed more films. His real strength is editing, though, cutting up such classics as The Terminator, Commando, Terminator 2, Rambo: First Blood Part II, and many, many more.

The Punisher is a phenomenal ’80s action film, bringing together ninjas, Italian mobsters and good, old-fashioned, American machine guns. I’m absolutely floored that The Punisher doesn’t have a better reputation, and I’m convinced that nitpicking is as responsible for the death of great action cinema as stupid CG is. When Louis Gossett, Jr. can escape his captors AND steal a piece of their pizza, walking out of the room with the slice stuffed in his mouth, I rest my case that the ’80s presented the perfect conditions for a fun action movie. If you enjoy action in any capacity, then The Punisher is a definite must-see.

The Punisher was a Reader’s Choice selection from my old partner in crime, Uncle Jasper.