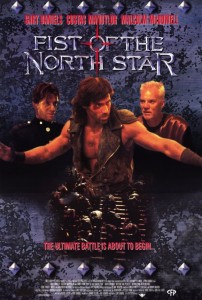 Fortunately, I kept that in mind when entering this film. And even more fortunately, the film does a good job of translating the story and setting into live action. I do want to take a moment to mention the set design, which is great. It’s clearly not the highest budget film around, but it does a great job of creating a dark and gritty post-apocalyptic setting. North Star always had a post-apocalyptic setting, but this film makes it feel downright dismal and oppressive in a way that the anime couldn’t muster; it was just too absurd to be taken seriously. But the live-action film has a heavier and more serious story that matches up well with the setting. 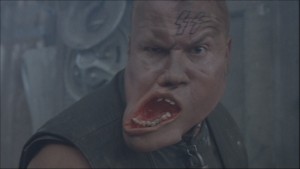 It’s still the same concept: Kenshiro gets beaten up by Shin, who steals his girl and now Kenshiro is out for vengeance. This version, however, places a greater emphasis on Ken’s role as a hero destined to save the world, and more specifically his desire to avoid all that and just track down Shin, but then getting caught up in the need to protect people along the way. The anime focused pretty much entirely on his quest for revenge, and helping out the innocent was something of a side effect.

Shin gets a far bigger role here than he did in the anime film, where he was almost a minor character. Ken’s brothers however, who were the primary villains in the anime, are pretty much absent. Raoh is nowhere to be found, and Jagi — renamed Jackal for this film — has no relation to Ken at all. Also missing is Ken’s buddy Rei, who was one of my favorite characters from the anime. But these omissions allow the film to focus more heavily on one part of the story and do it justice, rather than bounce through the plot points as fast as possible. 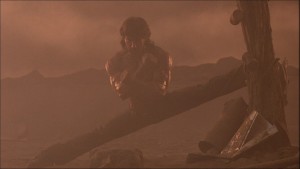 Don’t expect an Oscar-worthy script or anything. Malcolm McDowell tries his best to be Obi-Wan Kenobi, but the muddled metaphors about water flies and denying destiny aren’t going to be inspiring anyone. Nor is Jackal’s speech that ends with, “I did not write these words! But I feel them!” I felt Chris Penn was especially inappropriate for his role as Jackal. He carried an air of near incompetence, and he just couldn’t convince me that he was capable of being Shin’s second in command, either through brains or brawn.

The casting as a whole was rather unbalanced, as only a few of the actors were clearly athletes. The rest looked like fat guys chosen for their size, which made the action sequences feel rather odd. What I do like about the cast, though, is the sheer diversity of ethnicities. There were plenty of Black and Asian major characters, and even the white guys had random accents. I doubt this was a deliberate choice, but it felt as if it really was a jumble of random survivors stuck together in a crumbling world, and that went a long way toward selling the world for me.

With the more down-to-Earth story, there is also a much more down-to-Earth feel to the action. Instead of gratuitous head explosions, we get far more conventional martial arts battles. They’re not the most impressive fight scenes (remember: Kill Bill this ain’t), but they are plenty of fun, and they do a good job of keeping the film entertaining. 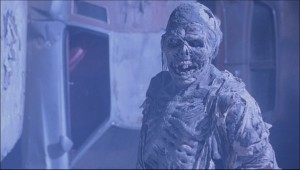 There are actually only two exploding heads in the entire film, and they don’t really count as such. One of them happens off-screen, and the other is really just spurting blood everywhere. This is pretty disappointing as head bursting is a hallmark of the franchise, but, as I said, you have to go into this film with a different set of expectations. On the plus side, there are some great practical effects for the gore, even if it isn’t as extreme as the anime. Those heads don’t pop wide open, but the FX for the expanding and pulsating flesh are fantastic, as are the effects for the poor saps that start spurting blood out of their elbows.

There’s even a great zombie in the mix too, but it was probably the biggest disappointment in the film. As much as I wanted it to throw down against Kenshiro, all it did was berate him before disappearing. Man, that would have been awesome to have a zombie martial arts battle, no matter how poorly choreographed. Actually, poor choreography might have made it even better. Sadly, we’ll have to wait for another film to realize that amazing concept.

This may not be a great film, but it made a lot of great decisions about how to adapt an anime to live action, and the end result was mostly enjoyable. I’m sure anime purists will be appalled by the differences, but really, this was never going to be an exact replica of the anime, and if it had tried it would only have been a miserable failure. Instead we got a film that did a pretty good job as an entertaining martial arts film while having enough of the wild blood and guts of the original to feel like the name still applies. It’s not as entertaining as the anime film, but it still has enough to make it worth watching.