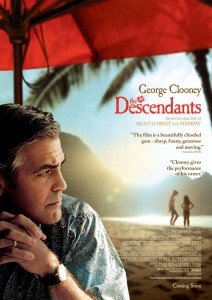 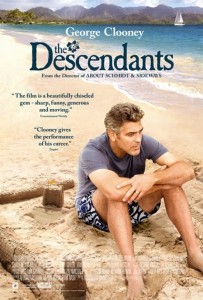 Director Alexander Payne is known for bringing intensely good writing to the screen, and The Descendants might be his best work yet. I certainly liked it more than his other films that I’ve seen (Election, About Schmidt, & Sideways), and I liked all of those pretty well. His visuals aren’t particularly artistic or flashy, but his films have an unmistakable style that feels cohesive. This style comes out most in the writing — specifically in the way the characters speak to each other — instead of the visuals, and in a primarily visual medium, that’s pretty interesting.

But there are perfect moments in this film that capture the sadness and pain of losing someone, and they are all directly influenced by Payne’s choices with the camera. The first is when Matt informs his oldest daughter of his wife’s situation while she casually swims in their pool. Instead of continuing the dialogue exchange, or focusing on her outburst, she submerges her head underwater and the camera follows. The outer world blocked out, the only thing that remains is her emotional face and the heartbreaking pain. Another similar moment comes towards the end of the film, and Payne’s choice of a tight close-up on a couple of faces punctuates and exaggerates the emotions we’ve felt throughout the film. It’s moments like these that set the great directors apart from the flock, and Payne proves once again — subtly — that he’s the real deal.

There’s also the choice to never show a flashback of Matt’s wife while she was living and breathing normally. Her character is confined to the coma and her hospital bed throughout, acting as something of a lightning rod, drawing people and energies toward her. Everything we know about her comes from the actions and interactions of the other characters, and as funny as it might be to say it, Elizabeth ends up being one of the most well-developed characters in the film.

The Descendants isn’t the type of movie you’ll want to re-watch again and again, but it is a fantastic piece of work. Perfectly acted by the entire cast — yes, even Matthew Lillard! — and expertly directed by Alexander Payne, The Descendants is truly one of the best films of 2011. It’s not a flashy movie, but it deals solely in deep, resonant dramatic situations brought to life by excellent, tragically comic writing. Laughing through tears is a great, liberating feeling, and The Descendants captures it beautifully.