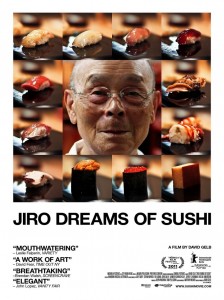 Expectations: High. I have a good feeling.

Jiro Dreams of Sushi is about a man driven to perfection. We don’t get to know much about the man himself, but as Jiro is so defined by his work, to know it is to know Jiro. At one point Jiro laughs while relating an old story where Jiro’s son once told his mother that a strange man was sleeping in their house. Of course, that strange man was Jiro, staying home on a rare Sunday morning off from work. It’s telling that Jiro, now 85 years old, finds humor in something most people would find crushing. He has a hardened outlook on life, informed by his own father telling a nine-year-old Jiro that he had no home to come back to. Trivialities such as fatherhood only get in the way of work, and Jiro feels more like a boss than a father to his sons.

But Jiro is not completely heartless. Both of his sons served apprenticeships under him, and he passed down all of his master sushi knowledge so they have a skilled trade. It’s perhaps not the most loving way to do things, but you can tell in his eyes that he does indeed feel a lot for his sons. But because he is defined by his work, he does not wish to quit, and eldest son Yoshikazu is still an apprentice at age 50. It is expected of him to succeed his father, so he continues on, bettering himself for the inevitable day when he must take over the restaurant completely from his father. I can’t imagine how Yoshikazu feels. He’s worked at the restaurant since he was 19, so for 31 years — the entire span of my life — this guy’s been slowly honing his sushi skills. Now that’s some high-level patience. 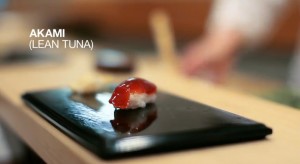 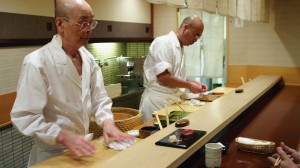 The film also takes us deep into the inner workings of the fish market where Jiro acquires his fresh fish daily. Jiro is a master of his art, but the men at the fish market are equal masters of theirs. The tuna vendor was especially interesting to listen to, as he describes his methods of tuna selection to be “anti-establishment.” I could go on and on about the things I found fascinating during this section, but that would kind of defeat the purpose of seeing the movie, no?

Above all, I think my favorite section of the film came towards the end when we learn of Jiro’s method for constructing each night’s course list. It’s beautifully done, both by Jiro and the filmmakers capturing it. Oftentimes a documentary crew feels like they are an outside force, collecting data and collating it into some watchable form, but the team here seem to be in perfect sync with Jiro and his food philosophy. Perhaps it’s not so much the documentarians working towards synchronization, as it is just letting go and entering Jiro’s stream. In the presence of a master, it’s more about learning from them than forcing yourself on the situation.

I loved Jiro Dreams of Sushi, and it makes me want to get into eating sushi. I don’t think I will, but the film has successfully romanticized the cuisine even more to me, and I really don’t need any help loving Asian cultures. Somehow the 25 cent ramen I ate while watching the film, with a splash of sesame oil for “chef’s flair,” just doesn’t seem all that impressive any more.