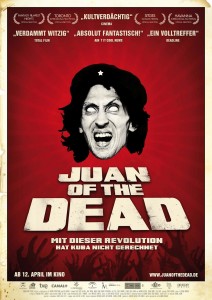 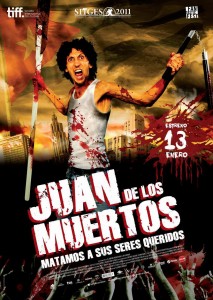 So as an homage, the story is pretty much a known quantity. Somehow the dead have begun returning to life, and social order slowly deteriorates around Juan and his friends. There’s a lot of social commentary peppered throughout (ala the Romero zombie films) about how the zombies are merely dissidents sent by the United States to undermine Cuba. It’s skillfully done and really hits their point home about the government obscuring the truth and lying to the common people. There’s also some sub-plots around the strained relationships between Juan and his daughter (ala the strained girlfriend relationship in Shaun of the Dead), and Juan’s friend Lazaro and his son. None of it goes beyond simple conventions, but that’s OK in this type of film.

Gore-wise it’s pretty much all CG, all the time. Most of it is rather obvious and not all that exciting, but a few moments transcend their roots and become genuinely impressive. One of these moments is a decapitation scene that is so over the top and fantastic that I’ll probably never forget it. I don’t want to go into details, but if you watch the movie, you’ll definitely know it when you see it.

After starting out rather slowly (which is fine), it takes a turn about a half-hour in, where the dark humor ramps up significantly as Juan and his friends turn from passive to actively fighting the zombies. They don’t merely fight for survival, though, they fight opportunistically to make money killing zombie loved ones for survivors. This never really grows into anything other than a few good jokes, but again, that’s OK. The initial zombie fighting scene is probably my favorite in the film (after that decap scene) because in addition to simple zombie fighting, Juan also employs some martial arts. He whips out the ninja stars, nunchucks and even has a shot involving some awkwardly awesome wirework. It’s all used to exaggerate the humor, and it works perfectly. Just don’t expect it to continue throughout the film, as Juan quickly ditches the Asian weapons for something he’s more comfortable with: a long, wooden paddle.

Juan of the Dead doesn’t take the zombie film in any new directions (other than the Cuban location), but it is a fun zombie movie for genre fans. You could argue that our culture has oversaturated the market with a literal zombie horde of shitty zombie movies, but Juan of the Dead is one of the good ones. Some missteps are there, to be sure, but overall I had a lot of fun watching it.