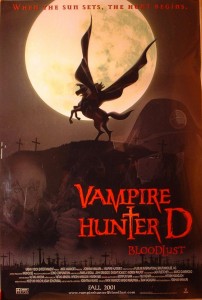 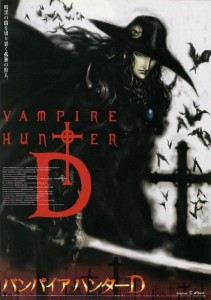 One thing I have learned this October is that when Kawajiri is in charge, you get some great animation. I’m not sure what his magic touch is, but everything of his that I have seen is very well animated, and Vampire Hunter D: Bloodlust leaves all his prior films in the dust. The animation is detailed and fluid with gorgeous backgrounds to bring it all together. Only Ghibli can do better, and even that might be due to seeing it on streaming video with occasionally dropped frames. I always prefer the scruffy edge of old animation, but this is easily among the best animated films I’ve seen, even with its modern, crisp animation run through a computer.

And all that gorgeous animation is put to good use. This is a another Kikuchi adaptation, and just like the first Vampire Hunter D, it’s got plenty of grisly monsters to show off, and vampires are the most normal of them. The main baddies that D tangles with this time are a trio of demons. The first travels through shadows and can kill by stabbing his victim’s shadow. The next is a sultry shapeshifting woman that blends into her environment and takes on powers from whatever object she has fused with. The third is a werewolf that is woefully underused. Though he has some good moments, his final showdown with D only lasts a few seconds. It’s probably the biggest flaw in the film (not counting the awful dub), but with so much other great stuff in this movie, I can overlook this omission. 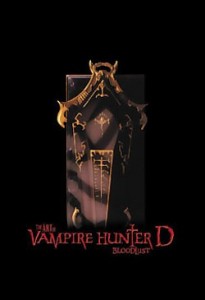 The three demons were hired to protect D’s real quarry, Meier Link, a vampire who has kidnapped a young woman named Charlotte. But just to keep things from getting stale, D has some competition. Another group of vampire hunters have also taken the job, and it turns out that Charlotte actually wants to stay with Meier. The story proceeds with never a dull moment as the three groups compete with each other and Meier takes refuge in a castle haunted by the ghost of a vampire that D’s father killed. You also wonder whether Meier is all that much of a bad guy, and whether D will wind up killing him, or taking his side.

It all adds up to a story of far more depth than one would expect from a simple vampire movie. It’s a shame that all the dramatic development is ruined by the acting. D has a heart-to-heart moment with one of the rival hunters, but thanks to the poorly acted and abysmally timed dialog any hope this scene had of resonating with you is thrown out the window. Fortunately the film is more action than drama, but the acting really does ruin an otherwise superb experience. D’s talking hand was pretty much ruined as well. It used to be dark and sinister with a snide edge to its sarcasm, but humor was never its real function. Now it’s almost cheerfully jocular, and nowhere near the laugh riot somebody thought it would be.

I didn’t really try to make this a rant about bad dubbing, but it’s so hard to talk about this film without thinking about how much better it would have been in Japanese. They didn’t even have the courtesy to make it so bad it’s funny (well, there are a few small moments). Instead it’s mostly dry and emotionless monotone. I’ve heard voice synthesizers with more personality than the actors in this film. It’s a nearly flawless film otherwise, and it’s only the acting that brings it down. If you’ve somehow become immune to the terrible English dubs in anime, then this is one of the best movies you can find, but if you have any appreciation for acting skill, it may be too much for you to take.