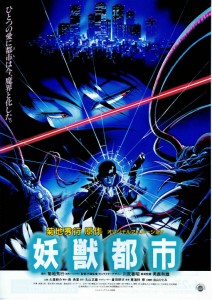 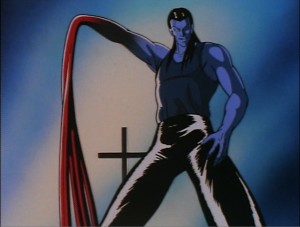 It also delivers a pretty solid story that goes beyond simple demons trying to kill humans. Instead there is the Black Guard, which attempts to mediate between the human world and the demon world. They are currently working on a peace treaty that will prevent outright war for another several centuries. Unfortunately some demon terrorists are out to stop the treaty by assassinating an ancient mystic named Mayart, one of the major players in creating the treaty. The main character, Taki Renzaburo, is assigned to be the man’s bodyguard along with his new partner Makie, a demon woman dedicated to the Black Guard.

Of course there needs to be some complications. Taki has some thoughts that Mayart is just a decoy to distract the demons from a more important target. And Mayart is certainly not the type to be a good diplomat as the crinkled old pervert spends his entire time trying to run off to a brothel, or at least get inside Makie’s pants, who rebuffs him at all turns. Makie is perhaps the film’s biggest flaw, as there is little explanation of her character, and we never know why she is so dedicated to her job, or why she wants peace despite being a demon. We just have to take her at face value and accept it.

The thing I was most disappointed with about her, though, is that we never see her demonic form, despite the fact that the movie is filled with some of the freakiest demons ever conceived. When the guy whose ribs shoot out from his chest and the floating head with tentacles are the throwaway villains, I want something impressive from the main characters. All Makie does is extend her fingernails into elegant knifelike blades and choke somebody with her hair. I can understand that they wanted to keep her sympathetic, especially with the romance that develops between her and Taki. Turning her into a hideous monster would have made her less alluring, and thus decreased our concern for her, but since this is something of a backwards Beauty and the Beast tale, I think it would have worked better if Taki saw and accepted Makie in her true form. Since the film is about making peace between humans and demons, this would have been all the more important to do. 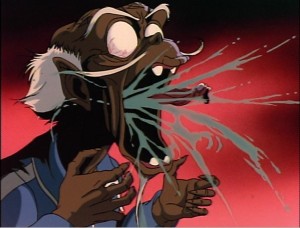 But I may be misleading you with all this thematic discussion. Wicked City isn’t trying to be poignant or enlightening, and its story is more than sufficient to accomplish its goal, which is to have a wild shitstorm of demon slaying action. You need a good weapon to kill demons, and Taki has one of the coolest handguns I’ve ever seen, ranking right up there with RoboCop’s. Though instead of rapid fire speed, Taki’s boasts such a powerful blast that the recoil knocks him backwards into walls with enough force to break them. And that thing still isn’t good enough to take on all the crazy demons out there.

Kawajiri definitely lets loose the crazy, here. The only line he hesitates to cross is Japanese law that prevents showing genitalia, though he uses some incredibly grotesque loopholes to sneak some things in anyway. That’s where Wicked City becomes its most disturbing. Not only does it have lots of creepy inhuman demons, but it has lots of creepy inhuman demons having sex, even dabbling in that peculiar Japanese debauchery of tentacle rape.

Whether sexually or otherwise, this movie gave me countless eye-popping, jaw-dropping, “oh shit” moments. I’m at a bit of a loss to come up with specific examples though, because the biggest of these moments looms over my mind, blotting out most of the rest of the film. Right at the beginning it hits you with a woman turning into a spider monster with deformed arms and legs tipped with claws and a huge, gaping, fang-filled mouth where she should have a vagina.

There’s really no point in saying anything more about Wicked City. I could go on and tell you what she does with that mouth at the end of the movie, but what would be the point? You undoubtedly had one of two reactions to that statement. Either you were appalled and probably left the site already, or you’re intrigued enough to give the film a try. (And if you are a part of that rare third group that said “What? That’s it?” then may God have mercy on your poor shriveled soul.) Either way, I’ve done everything I can. Follow your gut on this one. If you’re feeling nauseous, then stay away. Stay far away. If you’re into freakish depravity, however, then this is a must see.