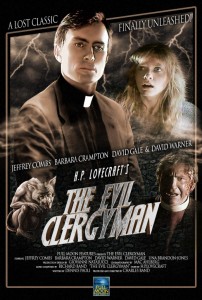 But it did and I hold it in my very hands as I type this. Wait a minute… OK, so it’s actually sitting near my hands as I type this, close enough. Anyway, enough hemming and hawing about the history and how much I wished on stars for its release, is it any good? The short answer is yes, the long answer is yeeeeeeeeeesssssssssssssssssssssssss. All kidding aside, it is good and it’s a real treat to finally get my hands on this one. While The Evil Clergyman does not recapture the same manic energy of Re-Animator, it does bring together three of the major cast members and it delivers the creepy, atmospheric tone of Lovecraft in spades.

The story is quick and to the point, dropping us into its tale without a shred of backstory. We quickly gather that Barbara Crampton is visiting the castle home of Jeffrey Combs, a clergyman who has recently killed himself. From here the story kicks off and we’re in for a ride quick and dirty as reality fractures before us. I’m a big fan of stories where things aren’t quite as they seem, and it’s not completely clear what exactly is going on, and The Evil Clergyman is great at this. This makes it a perfect film to re-watch, and now having watched it twice already, I can say that it definitely gets better with some foreknowledge of the events to come.

The workprint discovered was a rough edit, missing some sound work and a score, so Band commissioned his brother Richard Band to create a score in the style of his ’80s work. Richard Band has really outdone himself here, creating a score that encapsulates the haunted mood of the film perfectly. And it really does feel like one of his old scores too, so much so that I didn’t remember it was newly created until about halfway through the film. It sounds a bit like his score for The Alchemist, and as that’s one of my favorites of his work, I quite enjoyed his new contribution here.

As it clocks in at less than 30 minutes, I don’t want to spoil much of anything. Suffice it to say that if you enjoy the Empire International films, you’ll definitely enjoy this true gem from the archives. It may not have lived up to my wild expectations in full, but it’s a joy to watch Combs tell Crampton “Your body is my religion” and to see John Carl Buechler’s FX realize one of Lovecraft’s greatest creations, Brown Jenkin (AKA the rat with the man’s face). The DVD is currently only available direct from Full Moon, so go there and snap it up!

I should also mention that the DVD also features about a minute of footage from Trancers 1.5 which is set to be released next year! Spoiler alert: it looks fantastic!

No trailer, but here’s a clip!