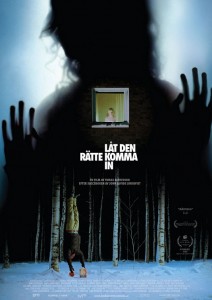 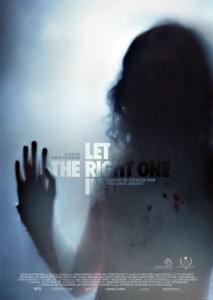 So with the fact established that Let the Right One In is a well-made film that’s definitely not for me, I don’t know exactly what to say. If you’re not really a horror fan, you’ll probably really enjoy this because it’s not really a horror film. I think this is exactly why the critics embraced this film. I was also going to say something about this film bringing horror to a more realistic place, but then I remembered the things that bothered me more than the boring pace and the unengaging, clichéd bully story: the interesting, yet completely unrealistic father figure character to the vampire Eli.

Originally I had typed “elder vampire character” but then I thought about how we never see him do anything vampiric, and I got to wondering if he wasn’t just a normal dude that somehow got roped into helping this 12-year-old vampire. Given the nature of the story between the two child leads, it’s easy to extrapolate that perhaps Eli’s advances aren’t quite what they seem, and are more a survival instinct against her father figure’s complete lack of common sense than true love. Anyway, back to why that father figure is dumb. So this guy kills people to feed Eli, so that she doesn’t have to hunt. He then bleeds them out by hanging them upside down, slitting their throats and collecting the blood in a bucket. Where does he do this, you ask? A secluded thicket? An out-of-the-way corner of an abandoned building? Nope, he does it in the middle of a park lit by gigantic floodlights. Oh, surprise, surprise, here comes a couple with their dog on a walk! Imagine that in a well-lit park! His next attempt is just as poorly thought out, and just left me shaking my head.

But even these ridiculous moments can’t hold a candle to the fucking ending of this movie. Skip to the next paragraph if you still want to see this one. OK? OK, here we go. So after bonding and thwarting the bad guys, Oskar and Eli run off together on a train, but because Eli’s a vampire she’s in a big cardboard box so the sun’s rays don’t get her. So these two 12-year-old kids run off in some sort of homage to the ending of The Graduate? W. T. F. I literally could not believe what I just saw. Supposing they get off the train during the night, then it’s no big deal, but what if they need to get off during the day? Is the notably weak Oskar going to drag this box around the train station? And do so unnoticed? It’s just so ridiculous. I know I’m supposed to have gotten so wrapped up in the budding romance that the ending becomes a sweet, touching ride into the sunset, but I didn’t so it wasn’t. I gotta call it what it is, and it’s dumb as shit.

So yeah, after hearing nothing but hot shit about how Let the Right One In was the best vampire movie ever, and how it’s a modern masterpiece and all that, I’m just not convinced. It’s definitely made with skill, and it’s gorgeous to look at, and it is one of the most unusual vampire stories out there. But a great horror film? Puh-lease.