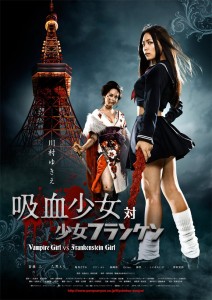 There are a lot of parts where the humor develops from mismatched tone and content, and Vampire Girl does a great performance as the vampire that half seduces, half coerces her crush into becoming a vampire. Her cutesy lackadaisical attitude infused with vicious brutality had me constantly howling with laughter. Considering that the main character is such a violent lunatic and her rival in love is a pampered bitch, it’s hard to come up with a hero for the film. Jugon is the closest there is, but he’s just a deer caught in the headlights and really has no control over and little impact upon the events.

Most of the plot revolves around the two elements of vampire love triangle and mad scientist experiments until they collide at the end in the title battle. It’s one hell of a showdown, and never lets up on the crazy. The hunchback janitor shows up wielding a spinal cord and ribcage while wearing samurai armor crafted from human bones and an assortment of brooms. Frankenstein Girl detaches an arm to use as a boomerang somehow (don’t question it). And the makes-no-sense action only escalates from there. 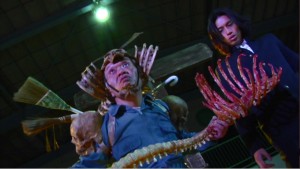 Aside from the main story there are a couple of strange subplots involving the school clubs, and they’re just as ridiculous as anything else in the film. The wrist cut club is a group of girls dedicated to cutting their wrists, and they’re gearing up for the next “wrist cut rally,” where audience members put up plastic sheets over their heads and cheer as if it were a Gallagher act. I don’t know how you win a wrist cutting competition, but apparently there is a right and a wrong way to do it.

The second club is, if possible, even stranger than the first. It’s the super dark club, where Japanese girls use special makeup to look like black girls. And like everything else in this movie, it’s done to an absurd degree. It’s taken to such heights of politically incorrect craziness that you know it could never have been made in the United States. The characters are dressing up in order to idolize black people, but at the same time, it’s done comedically and to such absurd levels that somebody will find it offensive. So if you think you might be that somebody, consider yourself warned.

Clearly this film isn’t for everyone, and it’s only a horror film in the sense that it centers around traditional horror monsters. Nor is it all that well made.  But if you’re the guy who thinks a girl getting her face ripped off her skull is hilarious, then you will have a rollicking good time. Obviously, I am that guy, and Vampire Girl had me laughing uncontrollably far more often than it should have.