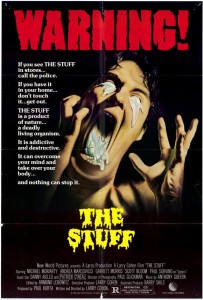 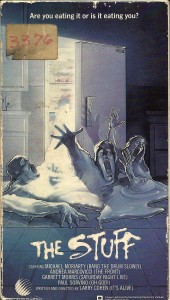 So while The Stuff is a fairly low-budget film, it succeeds in a couple of key places that make this fact null and void. First, our lead actor Michael Moriarty is incredibly enjoyable to watch. He plays the industrial saboteur role to the letter, but with just enough tongue-in-cheek humor to keep you smiling. The small roles from other recognizable actors like Danny Aiello and Paul Sorvino add a lot to the overall film too, but this is essentially Moriarty’s film, and without him it would be nothing.

The second reason The Stuff succeeds in spite of its budget are the FX. It’s hard to call this a straight horror film, as it’s really more of a comedy homage to 1950s sci-fi monster movies like The Blob. Regardless, the FX work is outstanding, with white stuff flowing into rooms and making everyone cringe. I think a lot of the oozing Stuff was done with miniatures, but they’re integrated so well with the rest of the footage that I was unable to tell definitively. I especially enjoyed when The Stuff blasts out of a bed with such force that it sends its victim up a wall and flailing for life on the ceiling. I know that it was achieved with a revolving room, but it looks absolutely incredible, and in this day and age when even simple FX look like shit because of CG, you can’t discredit the power of a simple, effective image.

I also felt a similarity in feeling to Troll 2 in spots, specifically the scenes with the young kid who’s hep to The Stuff’s jive, and does anything he can to thwart his family’s attempts to make him a Stuff-eater, including eating a shitload of shaving cream and going absolutely apeshit in a grocery store destroying shelf displays and smashing freezer doors where The Stuff is held. Perhaps these aren’t as bad as the Troll 2 kid pissing all over his family’s food, but they are definitely cut from the same cloth.

The film definitely has its flaws if you want to pick on it. I don’t particularly care to break this film down because it’s a movie to have fun with. That being said, the movie has absolutely no internal logic. Maybe I was missing key lines of dialogue, but there were numerous scenes where Michael Moriarty simply showed up exactly where he needed to be. Towards the end, Paul Sorvino and his Army buds were inside a Stuff processing plant in one shot, and outside wrapping up the aftermath directly after multiple shots of the whole place exploding with more Stuff than even a hot-shit team of fired-up Army dudes could take on. But that’s the thing about The Stuff, you never care about petty things like this; it’s all about the fun. You accept these head-shaking moments without question, because before you can even stop shaking your head, the film has moved on to another wild scene of pure entertainment.

The Stuff is the shit. If you enjoy ’80s horror comedies, social satires, ’50s monster movies, or all of the above, then you simply must watch The Stuff. Never before has a simple, bubbling pool of goo made my skin crawl as it does here, and I was laughing all the while.