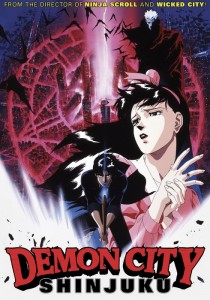 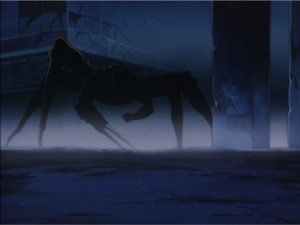 The plot kicks in with our main character Kyoya, who’s a bit of a womanizer, getting a late night visit from a floating old man who tells him he is the only chance to stop the evil wizard, Rebi Ra who is now gathering up his strength to spread his evil across the entire world. Kyoya doesn’t want anything to do with it, but he winds up getting suckered into rescuing a pretty girl, Sayaka, who has more courage than sense. Afterwards the two of them search the city for Rebi Ra while fending off demons and dealing with the miserable denizens of the ruins. Mostly, the people want money. I have no idea what good money is going to do for anyone living in a demon-filled cesspool, but what the heck, I’ll play along.

The demons on the other hand are just out for blood. The best parts of the film are when the characters are being chased around by them. The action is great and the fluid animation really makes it all come together. There are some beautiful, creepy scenes of the giant spider monster with a mouth in its stomach popping out of walls and other objects, literally passing right through them like a ghost, although there is nothing insubstantial about the destruction it causes as it rampages around. 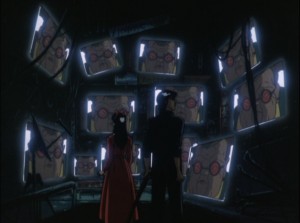 My other favorite demon is just as great. It is a seductive woman that morphs into a snakelike form that slithers through the air and entangles her opponents. The sensual playfulness that infuses her murderous actions gives her a whole different flavor of creepy. The confrontation with her, though quick, is enormously entertaining. But that is where the chinks begin to show. As much as I enjoyed it, the conclusion came a bit too fast, and the successive events of the movie seem more and more rushed. Perhaps all the great animation was burning through the budget at a faster rate than expected. The film’s unimpressive 80-minute runtime lends some credence to that theory.

More so than that, however, is the increasing blandness of the events and situations. Somewhere in the second half, I began drifting from intrigued excitement to attention wandering boredom. Some of this is because the other demons are less creative and interesting than the two I mentioned, but a large part of this is also my dislike of Sayaka. She is very determined to do things, but she is completely incapable of anything. Yet the story plays up her importance despite how little she contributes. I also just didn’t buy it when she defeats a demon by talking to it. Granted, depicting psychological events visually is rather difficult, so maybe this was a scene better left to the novel, but the idea of stopping a raging, incoherent demonic power just by being nice felt rather trite to me. 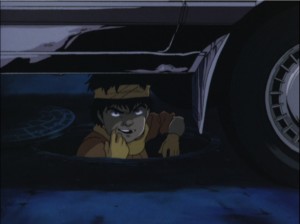 The final battle with Rebi Ra also left me feeling unsatisfied. Last week’s Vampire Hunter D had a rushed ending too, but I still loved it because it was a great fight. Not only was Shinjuku‘s ending short and to the point, but we already saw Rebi Ra kicking ass in the opening of the film, and he doesn’t do anything new the second time around. After all the crazy demon powers we sat through, Rebi’s simple sword-laser feels mild and unimpressive.

Somewhere along the way the film loses its sense of climactic grandeur and never gets it back. What really saves it from disaster by the end is its great animation. Even after I had lost interest, I was still watching with admiration as the fluid motion played out. This is especially unusual for an ’80s anime, and while this is from the late ’80s, it has the look and polish that was rare until well into the ’90s. Other well animated films from the decade, like Harmageddon, and especially Macross: Do You Remember Love?, have a jerky feel to the quality, saving their best animation for important scenes while less climactic moments get far less attention. The consistency of Demon City‘s animation puts it into a rare group alongside Akira and Studio Ghibli films. Not that it’s as well animated as those films, but I can’t think of anything else from the ’80s better than Demon City.  Possibly Project A-Ko, but not by much.

It’s not a bad film, but it burns itself out in the first half. If the exact same material had been the other way around I probably would have loved it, but when a film ends on a down note it kinda kills the fun of the first half, so I wound up disappointed even though there is a lot of great stuff here. If you can watch a bland ending without it ruining the fun you had earlier, then this is a good film to check out. It left me with a bad aftertaste, however, and others will probably have the same reaction.